Imagine a game in which “true cost” is the norm, and the public can see alternative realities that are fully transparent and show the art of the possible in the absence of corruption….note the “bottom up” nature of the project.

Inside One Man’s Kickstarter Quest to Build True Artificial Life

Virtual worlds have long been populated by creatures that interact, reproduce, compete, evolve and die. But by and large, they do so because their behavior is programmed by developers. These efforts can produce complex virtual ecosystems, but they’re not quite the digital reflections of what happens in nature.

Life in the real world is “programmed” by DNA, but its form and behavior are determined by the random mutation of genetic code, not by the intentions of a developer. Computer scientists have always been intrigued by the prospect of creating “artificial life” — that is, digital genetic code that can sustain itself over generations and adapt to meet the demands of a virtual environment without human interference. 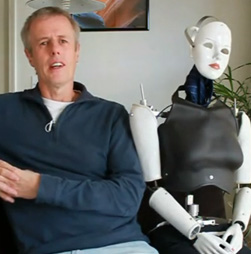 Defining these terms is really slippery, but I reckon my opinion must be right by definition, since I wrote the encyclopedia entry! Artificial life is the study of the nature of life itself, as distinct from life as we find it here on earth, and it tries to understand this through simulation, rather than just by studying nature. Artificial intelligence comes in two flavors, and the kind most people are exposed to has surprisingly little to do with actual intelligence; it’s really an advanced kind of automation. The other flavor — Strong AI — maintains that machines can be truly intelligent, but for the most part researchers don’t take much notice of biology at all. So I take “an artificial life approach to artificial intelligence.” I simulate biological components such as brain cells, enzymes and genes, and try to create whole artificial creatures, rather than code that behaves somewhat like one aspect of a brain but isn’t structured like a brain at all. AI is largely top-down, while A-life is decidedly bottom-up, so A-life-based intelligence is emergent.