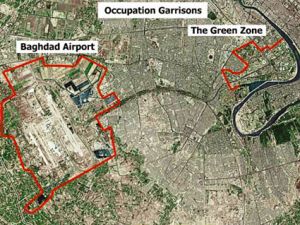 How Not to Withdraw from Iraq

Even as we withdraw troops, the enormity of the US embassy compound in Baghdad sends the wrong message.

Eight disastrous years after we invaded, it is sad but altogether true that Iraq does not matter much in the end.

It is a terrible thing that we poured 4,459 American lives and trillions of dollars into the war, and without irony oversaw the deaths of at least a hundred thousand, and probably hundreds of thousands, of Iraqis in the name of freedom. Yet we are left with only one argument for transferring our occupation duties from the Department of Defense to the Department of State: something vague about our “investment in blood and treasure.”

Think of this as the Vegas model of foreign policy: keep the suckers at the table throwing good money after bad. Leaving aside the idea that “blood and treasure” sounds like a line from Pirates of the Caribbean, one must ask: What accomplishment are we protecting?

The war’s initial aim was to stop those weapons of mass destruction from being used against us. There were none, so check that off the list. Then it was to get rid of Saddam. He was hanged in 2006, so cross off that one. A little late in the game we became preoccupied with ensuring an Iraq that was “free.” And we’ve had a bunch of elections and there is a government of sorts in place to prove it, so that one’s gotta go, too.

What follows won’t be “investment,” just more waste. The occupation of Iraq, centered around that engorged embassy, is now the equivalent of a self-licking ice cream cone, useful only to itself.