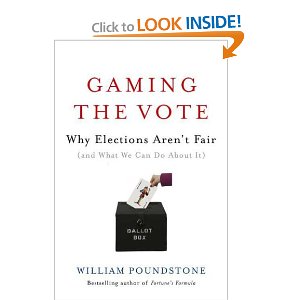 The book is extremely well-written, and a joy to read. It would be highly recommended, except for two fatal flaws discussed below.

Poundstone’s latest book deals with an issue that is fundamental to democracy, yet almost totally ignored in the U.S. While many books focus on the role of money in elections, or voter registration, or voting machine integrity, relatively few popularly written books have tackled the more fundamental question of how votes get translated into representation. This is not a question of voting machine technology, but of logic. Most Americans are remarkably unaware of the variety of voting methods available, nor of the fact that the plurality voting method that predominates in the U.S. is not the norm among modern democracies, and, in fact, is probably the most problematic of all voting methods.

Americans generally accept as inevitable that if more than two candidates are in a race, vote splitting may cause a candidate that the majority oppose to be declared elected. Poundstone points out that it doesn’t have to be that way. For hundreds of years thoughtful individuals have proposed alternative means of finding majority winners, that avoid this problem. Voting methods that allow voters to rank candidates in order of preference, for example, were first proposed over 150 years ago and have been used for government elections around the world for generations. He discusses the history of methods such as the borda count, condorcet pairwise comparisons, approval voting, and instant runoff voting.

Poundstone approaches the subject by telling stories about the key people involved (both historic and contemporary), making the history and theory of voting into a fascinating and compelling tale. His book avoids the technical formula-laden jargon of voting theory texts, but does justice to the concepts. He manages to present Kenneth Arrow’s Impossibility Theorem (often summarized as “there is no such thing as a perfect voting method”) in a way that makes it both understandable and interesting.

However, the book suffers from two fundamental shortcomings, that prompt me to give a poor overall rating. First is the fact that Poundstone focuses almost exclusively on the question of how to elect an executive, single seat office, as if this was the core problem we face. He gives scant attention to the single biggest issue of voting in democracies, that of how to achieve fair representation in legislative bodies. He discusses proportional representation in just a few pages, and never really tackles the problems inherent in all of the winner-take-all election methods that he spends the rest of the book discussing.

The other fundamental failing of the book is his championing the assertions of advocates of one particular reform as immune from the paradoxes and dilemmas facing all other voting methods. He simply accepts the claim that Range Voting, a theoretical method in which voters can give a score to each candidate, can avoid the dilemmas and tactical manipulation. Poundstone was either unaware, or chose to ignore the analysis of Nicolaus Tideman, in his 2006 book, “Collective Decisions and Voting,” which led Tideman to place Range Voting on the list of “unacceptable” voting methods, because of how prone it is to strategic manipulation.

Unfortunately, this shortcoming misdirects people in the key second part of his subtitle — “what to do about it.” Readers truly taking Poundstone seriously are likely to end up banging their heads against the wall — and perhaps making them more frustrated and alienated than ever.

Phi Beta Iota:  The review is stronger than the two stars allocated–we would recommend four.  However, the book is simplistic.  For a deeper understanding of how badly democracy has been subverted in the USA, and how easily it can be restored, see Reference: Electoral Reform–1 Page 9 Points 2.2

Politics in an Animal Setting