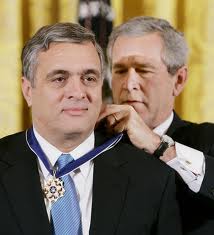 A decorated ex-clandestine operative for the Pentagon offers new revelations about the role the US Central Intelligence Agency (CIA) played in the shut-down of the military’s notorious Able Danger program, alleged to have identified five of the 9/11 hijackers inside America more than a year before the attacks.

Lt. Col. Anthony Shaffer joins a growing list of government officials accusing former CIA director George Tenet of misleading federal bodies and sharing some degree of blame for the attacks. Shaffer also adds to a picture emerging of the CIA’s Bin Laden unit as having actively prevented other areas of intelligence, law enforcement and defense from properly carrying out their counterterrorism functions in the run-up to September 2001.

Phi Beta Iota:  All CIA directors going back to Allen Dulles have been corrupt to some extent (Bill Colby and Judge Webster least so), but George Tenet and Mike Hayden and before them George Bush Senior appear to be the worst of the worst.  The very long article is certainly recommended for reading in full, but it also fails to explore the fact that Dick Cheney took over 9/11 and made it happen, along with the Mossad and Wall Street Zionists who collaborated with Larry Silverstein in a controlled demolitions insurance fraud scheme that also murdered 3,000 people, at the same time that Donald Rumsfeld orchestrated a missile into the Pentagon with pre-planted explosives going off a tad prematurely (video exists of the missile not yet hitting the Pentagon as it explodes from inside out).  It merits comment now that George Tenet was not, as the 9/11 Commission cover-up suggested, “dull,” but rather that he was serving on the direct orders of Dick Cheney to destroy all competing investigations that might have prevented 9/11.  Of all the people we would most like to place in mandatory benign interrogation before they die, Dick Cheney, Larry Silversteain, George Tenet, and Rudy Gulliani are our top four.

Documentary podcast “Who is Richard Blee” by Ray Nowosielski and John Duffy (makers of the mighty documentary 9/11: Press for Truth)

There is no other public source as consistently committed to the truth at any cost as this one. Please tell others about it, and consider a donation.

Every donor of at least $15 receives a Golden Candle pin.