Back in 1989 Bill Sienkiewicz illustrated a deck of cards designed to bring to light some of the sleazier folks that the U.S. government had done deals with. The text on each card was written by Dennis Bernstein and Laura Sydell. I wish there was an updated version covering the last 17 years, but in the meantime I’ve prepared a giant post with the images and text from the pack of cards. (This is an egregious copyright violation, but since these cards have been out of print for more than 15 years, I’m hoping no one will call me on it. If they did, I would–of course–take this down.) This will be a very image-intensive post–as usual, the little pictures are links to the bigger versions. 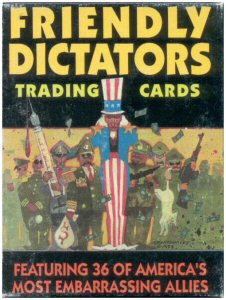 Here’s the cover from the box:

And this is the “about the creators” text (looking at the current bios for the creators, there has been some interesting career progression since they did this):

DENNIS BERNSTEIN is the Executive Producer of “Undercurrents,” heard daily on WBAI in New York, and nationally on the Pacifica Radio Network. His articles have appeared in The New York Times, The Village Voice, New York Newsday, Spin Magazine, In These Times, Extra!, and others.

LAURA SYDELL has a law degree and is a phi beta kappa graduate of William Smith College. She has reported for National Public Radio’s “All Things Considered”, “Crossroads”, and for the Pacifica Radio Network.

BILL SIENKIEWICZ’s work in Brought to Light has garnered rave reviews from Publisher’s Weekly, The American Library Association Booklist, and The Village Voice. His award-winning artwork can be seen in such comics as Moon Knight, Elektra Assassin, Stray Toasters, and Real War Stories.

And now, the cards themselves:

Phi Beta Iota:  Ethics matters.  Intelligence with integrity matters.  All three of these have been lacking in the US Government since the Dulles Brothers set up the dual chain of command, and the matter was sealed with the assassination and official cover up of John F. Kennedy.  Everything since then has been a downward spiral of corruption.  Since the trading cards were published, the USG in our name is now best pals with 40 dictators out of 42, only North Korea and Cuba are excluded from our warm embrace.

Palmer, Mark (2005).  Breaking the Real Axis of Evil: How to Oust the World’s Last Dictators by 2025 (Rowman & Littlefield Publishers)