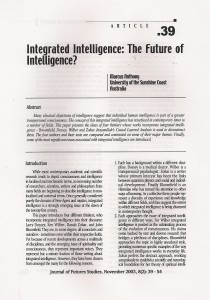 Phi Beta Iota:  This is the best short summary of the documented works of four great minds that have explored alternative forms of knowing that are compellingly suggestive, as one of the four reviewed authors says, that “Classical science and history will not suffice as the methodologies of the twenty-first century.  For these are the stories of colonialization, domination, and segmentation, and ‘Judeo-Christian millenarianism.'” [Bloomfield 1997: 172].  In combination (Phi Beta Iota again), traditional Chinese, traditional Indian, and Islmaic philosophies of balance and governance are going to be major forces in the 21st Century–and being ideational in nature as well as rooted in major demographics, there is absolutely nothing the USA can do about this EXCEPT become a Smart Nation that embraces diversity and the truth on their merits.