We know this person as David Booth and a regular enhancer often accused of fabrication, but his thinking is worth considering and he generally adds value to any topic.

Russia “Puzzled” Over Malaysia Airlines “Capture” By US Navy

By: Sorcha Faal, and as reported to her Western Subscribers 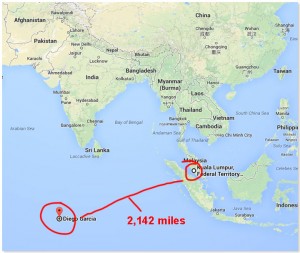 A new report circulating in the Kremlin today prepared by the Main Intelligence Directorate of the General Staff of the Armed Forces (GRU) states that Aerospace Defence Forces (VKO) experts remain “puzzled” as to why the United States Navy “captured and then diverted” a Malaysia Airlines civilian aircraft from its intended flight-path to their vast and highly-secretive Indian Ocean base located on the Diego Garcia atoll.

According to this report, Malaysia Airlines Flight 370 (also marketed as China Southern Airlines flight 748 through a codeshare) was a scheduled passenger flight from Kuala Lumpur, Malaysia, to Beijing, China, when on 8 March this Boeing 777-200ER aircraft “disappeared” in flight with 227 passengers on board from 15 countries, most of whom were Chinese, and 12 crew members.

Interesting to note, this report says, was that Flight 370 was already under GRU “surveillance” after it received a “highly suspicious” cargo load that had been traced to the Indian Ocean nation Republic of Seychelles, and where it had previously been aboard the US-flagged container ship MV Maersk Alabama.

What first aroused GRU suspicions regarding the MV Maersk Alabama, this report continues, was that within 24-hours of off-loading this “highly suspicious” cargo load bound for Malaysia Airlines Flight 370, the two highly-trained US Navy Seals assigned to protect it, Mark Daniel Kennedy, 43, and Jeffrey Keith Reynolds, 44, were found dead under “suspicious circumstances.”

Both Kennedy and Reynolds, this report says, were employed by the Virginia Beach, Virginia-based maritime security firm The Trident Group which was founded by US Navy Special Operations Personnel (SEAL’s) and Senior US Naval Surface Warfare Officers and has long been known by the GRU to protect vital transfers of both atomic and biological materials throughout the world.

Upon GRU “assests” confirming that this “highly suspicious” cargo was aboard Malaysia Airlines Flight 370 on 8 March, this report notes, Moscow notified China’s Ministry of State Security (MSS) of their concerns and received “assurances” that “all measures” would be taken as to ascertain what was being kept so hidden when this aircraft entered into their airspace.

However, this report says, and as yet for still unknown reasons, the MSS was preparing to divert Flight 370 from its scheduled destination of Beijing to Haikou Meilan International Airport (HAK) located in Hainan Province (aka Hainan Island).

Prior to entering the People Liberation Army (PLA) protected zones of the South China Sea known as the Spratly Islands, this report continues, Flight 370 “significantly deviated” from its flight course and was tracked by VKO satellites and radar flying into the Indian Ocean region and completing its nearly 3,447 kilometer (2,142 miles) flight to Diego Garcia.

Critical to note about Flight 370’s flight deviation, GRU experts in this report say, was that it occurred during the same time period that all of the Spratly Island mobile phone communications operated by China Mobile were being jammed.

China Mobile, it should be noted, extended phone coverage in the Spratly Islands in 2011 so that PLA soldiers stationed on the islands, fishermen, and merchant vessels within the area would be able to use mobile services, and can also provide assistance during storms and sea rescues.

As to how the US Navy was able to divert Flight 370 to its Diego Garcia base, this report says, appears to have been accomplished remotely as this Boeing 777-200ER aircraft is equipped with a fly-by-wire (FBW) system that replaces the conventional manual flight controls of an aircraft with an electronic interface allowing it to be controlled like any drone-type aircraft.

However, this report notes, though this aircraft can be controlled remotely, the same cannot be said of its communication systems which can only be shut down manually; and in the case of Flight 370, its data reporting system was shut down at 1:07 a.m., followed by its transponder (which transmits location and altitude) which was shut down at 1:21 a.m.

What remains “perplexing” about this incident, GRU analysts in this report say, are why the American mainstream media outlets have yet to demand from the Obama regime the radar plots and satellite images of the Indian Ocean and South China Sea regions as the US military covers this entire area from Diego Garcia like no other seas in the world due to its vital shipping and air lanes.

Most sadly, this report concludes, the US is actually able to conceal the reason(s) for the “disappearance” of Flight 370 as they have already done so after the events of 11 September 2011 when the then Bush regime “disappeared” American Airlines Flight 77 and its 64 passengers and crew after falsely claiming it hit the Pentagon, but which was confirmed by the CNN News Service [see video HERE] not to have happened.

Phi Beta Iota: It is now clearly established that a missile hit the Pentagon. The retrospective connection of cloaking technology is interesting — if and when a privately-funded international investigation of 9/11 is carried out, we anticipate a public mind-shift being achieved by the revelation of the facts in an incontrovertible manner.