Tom Heneghan is reporting on a coup d’etat being planned and pushed forward by Daddy Bush and James Baker who was responsible for stealing the year 2000 election for the Bush family.  Tom’s sources in French Intelligence have told him that James Baker is trying to make a deal and run a coup d’etat against Trump and install Mike Pence!   They think they are going to impeach Donald Trump, put in Pence as President and then install Jeb Bush as Vice President! 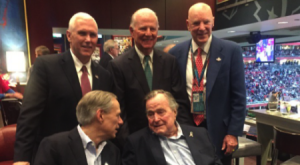 There is very strong evidence to suggest that the sources of this story are working for the FBI as disinformation agents. Based on a publicly disclosed hack of Hal Turner’s computer as well as a direct telephone call, it appears that Henegan and Webb are paying Hal Turner to be on the air, and that they are in fact informants who take direction from the FBI as part of the modern-day FBI version of COINTELPRO — they are agent provocateur’s seeking to divide and conquer.

Phi Beta Iota: We have no direct knowledge but tend to give Mike Pence the benefit of the doubt while absolutely believing that the Bush Family and James Baker (who regularly lies to the public about the USA being a “functioning democracy”) are doing everything they can to undermine Donald Trump and put yet another Bush into the White House via illicit means.