A Twitter poll on Trump’s air strikes in Syria began on April 6, 2017 was observed, minute-to-minute, staying at an exact 50% to 50% spread from zero to over a thousand total votes. Such numbers, while not impossible, are highly unlikely. Perhaps more bizarrely, the poll was observed to show increases in the total number of votes, but decreases later. Some decreases occurred within the same minute; others, in later minutes.

The total number of votes cast was observed to go up and down within the same minute, and go down in the future minutes. This behavior was not observed a single time for retweets or likes. 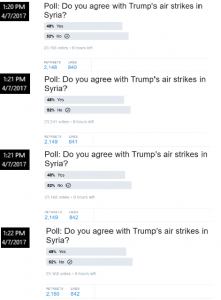 Phi Beta Iota: Eric Schmidt is known to be managing a broad conspiracy to manipulate search, poll, and trend results across Google, Facebook, Twitter, and surrogates such as YouTube, and to also be encouraging the withholding of advertising revenue from pro-Trump websites — the most well-known instance is that of Alex Jones whose $3.5 million in revenue was suspended without due process — less known pro-Trump channels are being “shadow banned” with advertising being “turned off” as an option for those channel managers. Robert Steele, Chief Enabling Officer (CeO) of Earth Intelligence Network, is on record as calling for a rackerteering (RICO) investigation by the Attorney General against the social media titans that now seek to manipulate and control the American conversation against our legitimately elected president.