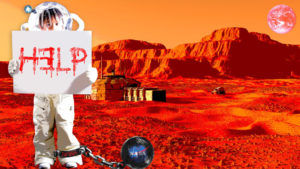 On Thursday, Alex Jones welcomed a guest to talk about how kidnapped children have been sent on a two-decade mission to space. NASA now denies the interplanetary conspiracy.

Robert Steele’s congratulatory letter to Ben Collins below the fold.

Ben, I loved your piece in The Daily Beast.  Always ready to talk to you in more depth about #UNRIG, the Deep State,  and Pedophilia.  Attached is the Deep State piece I have forthcoming as #13 in the Trump Revolution Series, and a book on pedophilia I am co-sponsoring in my capacity as a Commissioner for the International Tribunal of Natural Justice and its new project on exposing all aspects of pedophilia as the Achilles’ heel of the Deep State.

FYI, not only am a former spy intimately familiar with the counterintelligence cesspool that we call Washington DC, I am also the top Amazon reviewer for non-fiction, reading in 98 categories, over 2,500 reviews posted and I am recently nominated for the Nobel Peace Prize.  Make of that what you will.

The truth comes out roughly 25 years after the fact.  We now know who killed JFK and MLK, we now know Dick Cheney orchestrated 9/11 and then told 935 lies to get his way, we now know that most terrorist events are either false flag events, either crisis actors or mind control patsies, or orchestrated by the FBI as  a budget building exercise.

Anytime you want to walk the wilderness of mirrors with me, I am always on the record, never lie, and you can record every word.

Phi Beta Iota: Steele’s point was lost on the author — children appear to have been kidnapped and sent into space on “20 years and out” missions so that they grow up between the time they leave Earth and the time they arrive on Mars or more distant targets (e.g. Saturn). The “wormhole” capability was lost in 2009 or 2012. There will be multiple levels of disclosure, including extraterrestrial “permissions” to experiment on and breed hybrid humans, extraterrestrial technologies finally disclosed, and the entire Pentagon extraterrestrial and intraterrestial program exposed.

There is also the matter of NASA, which together with CIA is where all the Nazi scientists were home-based after Allen Dulles rescued most major Nazi leaders and scientists against the wishes of President Harry Truman. Mind-control is not just a CIA passion (remembering that 90% of all government employees are good people trapped in a bad system) it is a major covert focus for NASA, to include the use of humans with wiped memories as covert messengers not subject to interception by NSA’s conventional capabilities, and the reprogramming of humans both on Earth and in outer space to allow total control.

Robert Steele with Alex Jones: The Three Minutes on Pedophilia that Top Pedophiles Absolutely Do Not Want Anyone to See…

Trance: Formation of America by Cathy O’Brian and Mark Phillips

Media Matters is the originator of the story.

Alex Jones guest: Children have been kidnapped and sent to a slave colony on Mars

Steele’s lastest lecture on over 2000 non-fiction books across 98 categories, and including a topic on extraterrestrials, can be seen here: