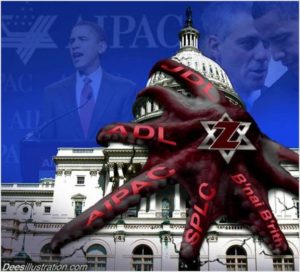 The American Israel Public Affairs Committee (AIPAC) is an agent of a foreign power (Zionist Israel) by any definition, but after John F. Kennedy was assassinated, partly because of his intent to force all such Zionist-directed US-based organizations to register as agents of a foreign power, AIPAC has been able to bribe, blackmail, and manipulate most Members of Congress — Cynthia McKinney is one a few exceptions — with impunity.

The AIPAC Pledge that most Members of Congress have signed is “top secret” and a copy of the US version is not available. We have however tracked down a copy of the UK version, and provide that below with scathing commentary. Most Members are lying to their constituents about this matter and must be held to account for placing Israel First instead of America (and their specific constituents) First.

Text of the Pledge:

“If elected to the [Parliament/Legislature] I Pledge…

To oppose the extremists who challenge Israel ’s right to exist. PBI: Cynthia McKinney and I support the right of Israel to exist within its original borders and as part of a two-state solution with Jerusalem as an international city and the termination of all foreign military and financial assistance to all foreign countries including Israel and Saudi Arabia specifically, coincident with the termination of Zionist control and manipulation of all major institutions within the USA.

To support the right of people in the United Kingdom to enjoy Israeli culture and promote business, educational, religious and other connections with the Jewish State without fear of discrimination, boycotts, harassment and/or intimidation.  PBI: this is code for legalizing censorship and “the Zionist exemption” to Constitutional rights to free speech and freedom of assembly.

To support those who genuinely seek to promote and establish a permanent, just and comprehensive peace between Israel and its neighbours. PBI: this is totally false, Zionist Israel seeks to Balkanize the Middle East, manipulates the US into regime change operations, is ordering Jared Kushner to arm the Saudis with nuclear weapons so they can wage a proxy war on Iran, and is stealing Jordan’s water and Syria’s oil while genociding the Palestinians.

To celebrate the fact that Israel is a free society and parliamentary democracy that extends to all its citizens the right to practice their religion and have access to religious sites in Jerusalem. PBI: This is utter bullshit. Zionist Israel is not a functioning democracy (nor is the USA) and as long as it is genociding the Palestinians and seeking to control Jerusalem it is in a state of mortal sin.

To support the International Holocaust Remembrance Alliance (IHRA) working definition of antisemitism. PBI: This is code for perpetuating the holocaust myths while avoiding the fact that Zionism is anti-Semitic in the extreme, and for ignoring all other holocausts that are far greater.

To encourage HM Government to promote trade with Israel that will increase investment and jobs for people in both countries.” PBI: This is code for furthering Zionist penetration of all communications and computing systems in both the USA and the UK, not only in banking and trade, but within the secret intelligence agencies  that are totally compromised and in essence providing near-real-time duplicate collection and analysis to Zionist Israel.

PBI: The Election Reform Act of 2017 frees all Members from bribery. Only the President, in offering a secret Presidential Pardon in return for a full accounting of who is bribing whom over what, can free the Members from being blackmailed.

#GE17 Candidates that signed ‘A Pledge for Israel’

The best available list of Members in both the Senate and the House that are “owned” by Zionist Israel and its AIPAC agent can be seen at this post:

Mongoose: Congress Seeks to Criminalize Any Criticism of Israel — We Do Not Make This Crap Up!

Mongoose: Four Levels of Jew — Not to Be Confused with the Khazarian Mafia Led by Rothschilds

Owl: Did Netanyahu Just Threaten Obama with Assassination? We Recollect Rabin in Dallas as a Party to the Assassination of JFK

ROBERT STEELE: Cynthia McKinney and I are under attack by Zionists (not to be confused with loyal American Jews — Zionists are agents of a foreign power who bribe, blackmail, and manipulate US leaders into a state of treason). MeetUp CEO Scott Heiferman closed down our PAID Pro national network of 435 MeetUps in a clearly discriminatory action against Cynthia McKinney and myself and our vision for an honest America — he may well have been acting under instructions from AIPAC. We  are also dealing with Zionist trolls across the Internet. The good news is that we have replaced MeetUp with Facebook Communities (and saved $77,300), and our legal action against the Zionists slandering and libeling us is likely to yield a considerable financial reward since crowd-stalking is “conspiracy” and triggers triple damages. Enjoy the MeetUp cartoon below by Bob Ocegueda, see his twelve strip cartoon series on election reform in both English and Spanish here. 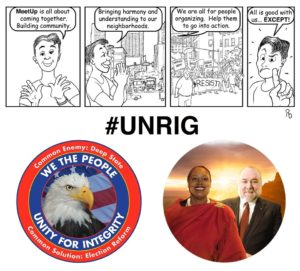