Weak signals we girls are getting…

Rumors that Saudi Crown Prince Mohammad bin Salman has hired mercenaries to torture recalcitrant royals and officials sleeping in the ballroom of the Ritz Carlton in Riyadh have been circulating since shortly after last month’s “corruption crackdown” naked cash grab.

Now, Middle East Eye reports that one of MbS’s guests has reportedly died under torture rather than fork over his money and assets to his domineering relative. He was reportedly beaten and tortured so bad his family members had difficulty recognizing his body.

Even though oil prices are seemingly stuck at $50 a barrel, the Saudi government knows that its survival depends in part on placating the country’s citizens, who’ve grown accustomed to the trappings of a lavish welfare state. 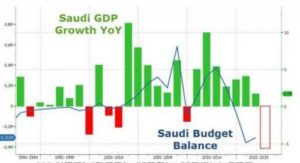 Phi Beta Iota: Hard times require hard measures. In some ways we suspect that Donald Trump will be doing the same this to US “royalty” (the 1%) starting with George Soros and eventually reaching Sheldon Adelson who has been a traitor on every possible way against the US Constitution and the US public.

Saudi Arabia — like the USA — lacks an intelligence community with integrity able to do do holistic analytics, true cost economics, and Open Source Everything Engineering (OSEE) comparative (opportunity cost) analytics.

Confiscating ill-gotten gains (in the USA there is both a debt jubilee on the table as well as recaputure of over $21 trillion in stolen assets) is a short-term measure. The only long-term i.e. sustainable solution is to embrace the ideas of Robert David Steele with respect to creating a series of Open Source Agencies (OSA) all linked into a pervasive World Brain network that allows all individuals to access all information in all languages and mediums, free. This will create infinite wealth and establish peace with prosperity for all.