1. Trump tweets he is going to pull out of Syria.

2. Within 24/48 hours Gas attack from Assad? or ISIL? (see below photo demonstrating who might have strings in this show: John McCain)
3. Airstrikes from F-15s with Russians believing it to be USA (it was Israel)
4. Mueller applies a post strike squeeze:
https://apnews.com/a256631aa1a242e2a7b705e2b6a5b989/Trump-furious-after-FBI-seizes-documents-from-his-lawyer
Seems like someone [the chosen people] tried to start a war? Then applying pressure afterward to sue for silence? http://defence-blog.com/news/russia-suddenly-puts-troops-alert.html 4-8-2018
Q anon is getting better: (he’s got photos I’ve had for about a year. His Lolita express stuff is about 2 to 2.5 yrs old. It’s been rolling around for a bit. Never knew the girl’s name. Now I do. She’s now a madam of a high class whorehouse. She might want to hide.. if I was a man that wanted to document this… this first link contains a very important name and social media information…)
https://www.youtube.com/watch?v=UYZK6SLUDac (Lolita express victim named)
https://www.youtube.com/watch?v=GRBDH_i0FB4 (the senator from AZ seen hanging out with tango leadership)
I suspect this is pure Kremlin propaganda but it’s still worth a listen the tone always seems to match the mood I’d expect out of them. How do I know? Well, they tell you who a source is (often RU int), this channel is updated constantly and the material ranges from crazy batshit conspiracy stuff to sensible material that makes me wonder how crazy/fooled I might be?
https://www.youtube.com/watch?v=IzS12KrYTSw
4-9-2018
I am just not even gonna comment on the UK assassination plot on the ex-RU spook. Assange has been silenced. Some people discussed extracting him by force…
http://www.dailymirror.lk/article/Punishment-of-Julian-Assange-is-political-not-legal-148445.html
So, he made some comments suspicious of how quickly RU got pinned for that poisoning.
I’d prefer we avoid WW3. War sucks.
This is the photo I mentioned. Strange bedfellows this guy has, eh? (I sent this before but here it is again.. seems increasingly relevant) 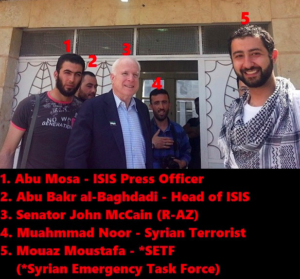