Former Vice President Joseph R. Biden assailed President Trump’s supporters during a speech Saturday at the annual Human Rights Campaign dinner in Washington, lamenting that “virulent people” and the “dregs of society” still had a friend in the White House. 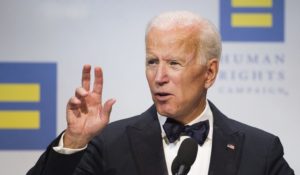 Phi Beta Iota:  Joe Biden is an alleged pedophile. A proper investigation, including a complete review of all of his emails and calls now in deep storage at NSA, will probably provide more than enough evidence to indict him — if he has not already been indicted as one of the many sealed indictments awaiting the President’s order for action. We anticipate that the President will be judicious and take down a Republican pedophile first, for each Democratic pedophile that is brought to justice — for some it will be a private execution, for others public shaming.

Joe Biden is Probably a Pedophile