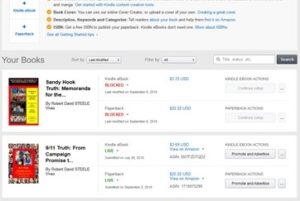 Read the BLOCKED publication free online (as delivered to the White House 8 September 2018) — decide for yourself if Amazon should be added to the class action lawsuit and also included in the RICO investigation.

Phi Beta Iota: We believe Amazon to be a criminal organization, in violation of all of its customer agreements with respect to the integrity of the information entrusted to Amazon. Put bluntly, Amazon is not only cross-correlating across all silos (in violation of all of its agreements with customers who are paying Amazon in trust), but it is providing total and complete access to all of this information to Zionist Israel’s secret intelligence services. Amazon is screwing the US Government; screwing its cloud and infrastructure customers; and screwing the public. Earth Intelligence Network (EIN), publisher of the blocked publication, will be joining the class action lawsuit against #GoogleGestapo while ensuring that Amazon is included, and mobilizing all those who have had books or reviewed BLOCKED by Amazon, in support of that lawsuit. EIN is also beginning a campaign to demand a freeze of all new contracts with Amazon until such  time as it ceases to violate Title 7 and discriminate against authors who challenge the Deep State / Zionist party line.