A Simple Plan For Lawfully Handling The Migrant Invasion…

1) DJT Declares A National Emergency, Call Up The Military…the real military, not NG.

2) Use Corps Of Engineers To Erect several open air holding facilities, complete with razor wire. Staff with USMC. Have buses at crossings to convey all who want to willingly cross to the pens. Sort migrants to pens based on country of origin. Provide Portalets, mre’s, water and blankets.

3) Simultaneously, but within a day or so, send 75 NG C-130 transport planes (which can operate from mainly unimproved desert strips). Each can handle 100 or more passengers with ease. Load them on busses, give each a visa application, and deliver them to the planes. fly them back to their country of origin under military guard, accompanied by US fighter escort.

4) Deduct the cost of the entire operation proportionately from the ‘foreign aid’ normally given to each country.

It will be over quick, and will serve as a lesson to future mobs.

Too simple? Won’t happen? Don’t count on it….DJT is pretty well pissed, and all the above is perfectly legal under existing national law.

Is This The Democrats ‘October Surprise?’ Funded By Globalists, This Act Of War Is Part Of The Planned Take Down Of America

Tip of the Hat to Ed Jewett.

Ed Jewett: The Illegal Invaders Caravan and the Protocols of Zion


Tip of the Hat to Alert Reader.

DHS: 270 convicted criminals, 20 nationalities in caravan
It’s Not Unreasonable to Be Worried about Disease and the Caravan
Phi Beta Iota: The President is completely correct in interpreting the US Constitution: babies born in the USA to foreign parents do not have birthright citizenship, that was never intended. Below is an extract — this will be settled by the Supreme Court as the President intends.
Robert Steele: 10 Moves To Hold the House UPDATE 9: Free Market Money No Fed No Interest

End  Illegal Aliens Part A No More Catch and Release Part B No More Birthright Citizenship.

Part A: The President has announced an end to catch and release. Every illegal alien will get a hearing and most will be promptly deported.

Part B: The President has connected the dots — and we have senior Democrats who agree.This is not about amending the Constitution this is about properly interpreting the Constitution which is where the Supreme Court comes into play. This is UPDATE 8. 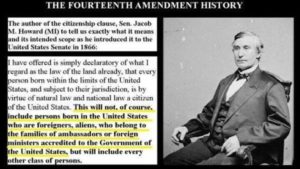 Author of 14th Amendment Explains EXACTLY Who It Was Meant For

Trump Connects the Dots on Dangers of Illegal Immigration

It is possible that a proper plan exists to return the Caravan — mostly young males — to the countries or origin, but at this time no one appear to be thinking creatively in the US Government.

For $10M the Caravan can be made to disappear by Christmas. The deal is simple: line up 100 buses, sort everyone by country of origin, and bus them home with expenses paid along the way and $1000 for each adult as they step off the bus in their home country.  Alternatively, and as originally suggested, fly them home via US military cargo aircraft.

Now that it is clear to those in the Caravan that they were lied to, there is no easy entry, catch and release is over, they are looking at a three month waiting period and low prospects of being admitted, a humane efficient offer to return them home with $1000 each for their “long march” is exactly the right thing to do.

We pray someone in the White House will figure this out.