The possibility exists that these transgender males are the result of a teratogen and thus a birth defect covered under the Americans with Disabilities Act. Since this condition creates huge economic loss in terms of earning income and huge economic costs in terms of treatment, perhaps it can be utilized as a way of shutting down Big Pharma and the chemical industry that produces additional feminizing compounds that are being fed to Americans daily. Just get the transgenders into a class action to recover economic losses from Big Pharma and related chemical induustries.

If you haven’t seen the science on multiple chemicals used in every day life here in America having hormonal effects, I’ll send you some. It surprises me that Ms Bilek doesn’t seem to realize this issue as an environmental activist.

I have long term friendships with several transgenders. They are not faking their unusual orientation. They are in pain and they do need understanding. If the Christian Right does not want transgender children, get them behind the movement to clean up our environment as there even exists research on mercury contamination and ibuprofen in the public water supply causing behavioral changes of a sexual nature in males (of different animal species).

It would be useful to know if the Nazi’s (I G Farben) knowingly experimented with attempting to influence gender with intrauterine exposures as they may have intentionally used this as a means of decreasing male aggressiveness in their future opponents. They did all kinds of mutilating surgeries so this concept of using intrauterine exposures isn’t so far fetched. It would be terrific to put the conservatives and the liberal environmentalists on the same page.

ROBERT STEELE: Indeed. One of the reasons I am hell bent on making holistic analytics and true cost economics the law of the land is because it will finally study, at the macro and micro levels, all of the legalized poisons that we have allowed predatory corporations to dispense. The truth in detail is the best way to unrig the system, in part because it can educate the public and with true cost hand held alerts, wipe out entire segments of toxic industry overnight. Completely apart from all the suppressed technologies including free energy, we have a corrupt retarded academic, medical, and scientific community that is not at all concerned about the fact that its craven idiocy is genociding the public and ecociding the Earth.

It is clear to me that the agricultural and pharmaceutical industries are criminal cartels protected by a federal government that turns a blind eye to true costs. 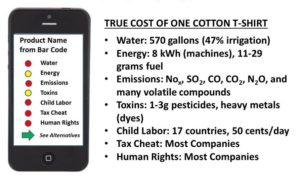 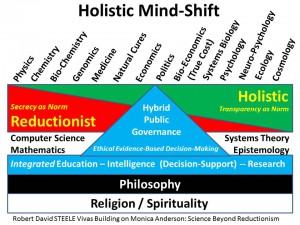 And here is what the Vatican has to say about this:

“…male cells (which contain XY chromosomes) differ, from the very moment of conception, from female cells… in such situations, parents cannot make an arbitrary choice on the issue, let alone society,”