Phi Beta Iota: Below is the negative half of our earlier post, now exclusively dedicated to SPECIAL: UN Trump Triumph for Peace. This avoids tainting the more positive piece with what is surely the single greatest piece of bullshit theater since the daughter of the Ambassador of Kuwait was coached by Hill & Knowlton to lie to Congress, on TV, about Iraqi soliders ripping babies out of incubators and throwing them against the wall (she was in a posh District of Columbia home and school throughout).  Whoever arranged for this mind-controlled child to appear at the UN should be investigated, indicted, tried, convicted, and put in jail or at least expelled from the USA.

And now to the mind-controlled zombie child.

What mind-controlled Hollywood idiocy. I am reminded of the US Congress pretending it did not know that the alleged witness to Iraqi soldiers throwing Kuwait babies out of incubators and against the wall, was in fact the daughter of the Kuwaiti Ambassador to Washington and was never, ever, near the combat zone. Has anyone bothered to listen to every word of this? This was a professionally crafted script delivered my a mind-controlled zombie.

This kid was sold by her parents, shopped by her parents, to the forces of evil. This child appears demonic in this photo, because she is.  She has been possessed. I would not be at all surprised to learn that she has been raped at an early age and is being groomed for a global tour that will include her being loaned  to local elites for their abuse as she  tours. 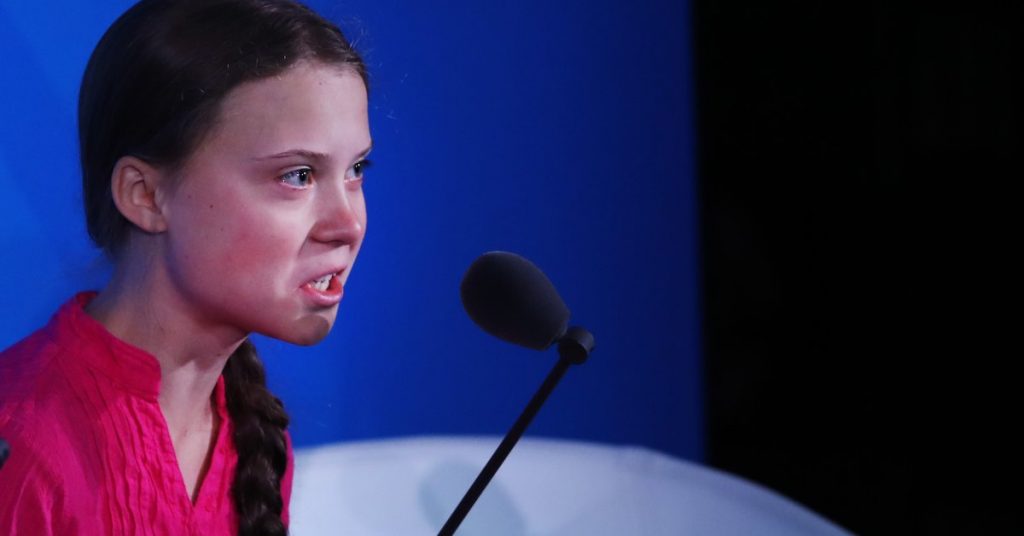 Just in from an Alert Reader, a pointer to

The Disturbing Cult of Greta Thunberg

The Cult of Greta Thunberg is an extremely disturbing one, and one which marks a new low in the drain-circling that Western civilisation seems bent on. Even if I happened to believe that the naturally occurring gas that each of us breathes out many thousands of times per day, and which plants use for photosynthesis, is going to end up being the death of us, I would still be profoundly disturbed by the use of this girl — who is very clearly mentally unstable — as the poster-child for the agenda.

In my personal view, the time has come for the USA to leave the UN entirely, and to throw the entire UN organization out of New York City. The Specialized Agencies do not respond to the Secretary General and are simply a variation of Central Banking (the WTO and World Bank for instance, create poverty while helping the Central Banks loot countries full of natural wealth).

Enough already.  Hats off to President Trump for getting it right, and shame on any fool that believes this child is anything other than a scripted mind-controlled fraud. 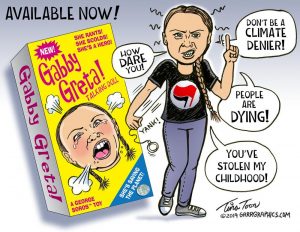 Allegedly suffering from Asperger’s, a condition often associated with toxicity from aluminum from vaccinations but… Sweden does not impose any mandatory vaccinations.

And there is a lot more wrong with her than just Asperger’s (Some APA diagnosis, not even recognized worldwide. Please !)

She is obviously mentally disturbed, it goes way beyond autism, and it has become obvious to anyone with any common sense, including parents of so-called Asperger’s kids.

Things were done to her at a very young age. Looking in her family history would go a long way toward figuring out what.

That kid had no business speaking at the UN. How did she get that far? Can anyone speak at the UN as a self-employed homeowner from Ohio or Nebraska?

Theater of the absurd pushed to extreme. I refuse to pay for any of it. One more reason I will work until I die but I will not pay federal taxes or social security I will never collect anyway, to fund insanity I never chose to pay into.

It is a very bad play I never bought a ticket for. Your blog and many others shed the light we all need.

Time to pound on:
1) How does one get “invited” to speak at the UN?
2) Who makes the decision, based on what and how?
3) Did Assange ever get invited to the UN? If not, why not?
4) Shouldn’t he be?
5) What is the UN anyway?
6) Who pays for the UN?
7) If we pay for it, where is the accounting by country and by citizens of those countries?
8) What has been the return on investment per country?
9) How come the UN Wikipedia changes members as it suits it? https://en.wikipedia.org/wiki/Member_states_of_the_United_Nations
10) How come Yemen was a full-fledged member in 1947 and no longer is?
11) When did that new list come about and based on what? https://en.wikipedia.org/wiki/2019_United_Nations_Security_Council_election

We are all so screwed that it will take a few years of unlearning and relearning. It can be done the quick way by starving the beast, questioning everything and refusing to pay one cent toward insanity. Since people want a JOB, no matter where from, it will take a long time. 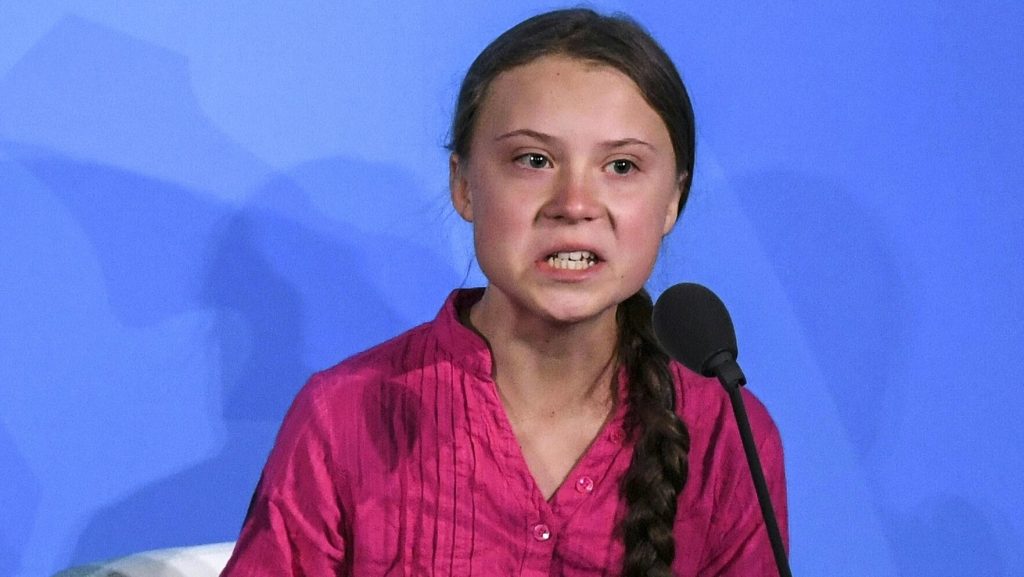 (Natural News) The eco-fascists have now turned to terrorizing and mentally abusing their own children as a tactic for social influence. Greta Thunberg — the hysterical 16-year-old girl who has been rolled out by her Antifa-linked parents to lecture the world about the climate change hoax —  is apparently a prisoner of a torturous brainwashing / indoctrination scheme that has terrorized the poor girl into believing she will literally die if global warming isn’t stopped.

Yes, that kid is only a pawn in the hands of who profits from that insane “climate change” propaganda.  And her (famous) parents are throwing her to the wolves because… they too profit from it.

Make no mistake. When the most influential multinational corporations, the world’s largest institutional investors including BlackRock and Goldman Sachs, the UN, the World Bank, the Bank of England and other central banks of the BIS line up behind the financing of a so-called green Agenda, call it Green New Deal or what, it is time to look behind the surface of public climate activist campaigns to the actual agenda. The picture that emerges is the attempted financial reorganization of the world economy using climate, something the sun and its energy have orders of magnitude more to do with than mankind ever could—to try to convince us ordinary folk to make untold sacrifice to “save our planet.”

Back in 2010 the head of Working Group 3 of the UN Intergovernmental Panel on Climate Change, Dr Otmar Edenhofer, told an interviewer, “…one must say clearly that we redistribute de facto the world’s wealth by climate policy. One has to free oneself from the illusion that international climate policy is environmental policy. This has almost nothing to do with environmental policy anymore, with problems such as deforestation or the ozone hole.” Since then the economic policy strategy has become far more developed.

The use children as bait to create media sympathy for various causes, is an increasingly used method in the West. Latest, the public child abuse of Greta Thunberg, the Swedish 16 year old lured into the role as “media puppet for climate change.” She recently spoke at the UN, probably without a clue of the sinister political game she is a useful tool for.

The teenager is even nominated for the Nobel Peace Prize this year, which she might get judging on the politicized way that the Norwegian Nobel Committee picks its candidates. Whomever is popular in the ultra-liberal mainstream media has in recent years suddenly also been awarded the Prize, disregarding the requirements stated in the will of Alfred Nobel, writes Hanne Nabintu Herland, founder of The Herland Report, at World Net Daily, one of America’s leading Conservative outlet.

Swedish Greta Thunberg has a known past with mental issues, a diagnosis of Asperger’s syndrome, high-functioning autism, depression, a history of self-starvation and obsessive compulsive disorder.

This is the child now pampered by power structures in society to travel the world with the mainstream media covering her every step as she gives apocalyptic speeches and end-of-the-world threats. As the world searches for heros, someone in powerful places has decided that Greta Thunberg is what we need. Let us guess that it will remain that way for as long as Thunberg and her parents allow the abuse of the girl to continue.

The young girl initially found world fame just a year ago, after organizing school strikes in her home town in Sweden, skipping school and demanding climate change to be taken seriously by world leaders. Then someone paid for the community organizing of similar protests in over a hundred cities. Since then, someone has organized an unbelievably long Wikipedia bio, has paid for her being forefront at the World Economic Forum in Davos, in front of the British Parliament, at UN Climate Talks and taking center stage in mainstream media. After dropping school, again, to travel the world and perform theatrical, angry speeches, one wonders what benefit it will bring her later in life.

The world truly has gone mad. Thunberg, now used by the highly politicized “climate change” industry is only 16! The child is allowed to give hysterical, rude talks about “the world at mass extinction, entire ecosystems collapsing, the end of the world stories.

“idealistic youth are simply being herded into pre-approved movements to create the illusion of a popular mandate for what the ruling classes have already determined to be the best course of action for preserving their dominance and control.”

Tip of the Hat to Ray Songtree of Lipstick and War Crimes.

Child polemicists have almost always had the dubious distinction of being indicators of movements that have gone to seed. As formerly stable paradigms of thinking and doing reach exhaustion, new leaders tend to embrace extremism in order to keep true believers in the fold. Sometimes childish and unstable rantings are regarded as signs of exceptional and unassailable devotion to truth.

‘There Is No Climate Emergency’: Scientists Call for Reasoned Debate