The President’s intent to do 9/11 full disclosure is evidently getting out because I am now in demand on the topic of false flags.  I am on record as having run a single false flag for the CIA, and have published in this area, including two collections of memoranda prepared especially for President Donald Trump, so this page is my “stock” reference page henceforth.

WHAT IS A FALSE FLAG? 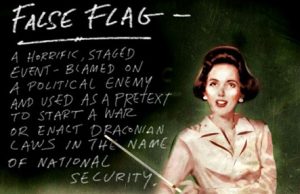 The term “false flag” originated in maritime warfare, where not only pirates, but also naval vessels would fly the flag of their enemy so as to get close enough to surprise them.

The term “false flag” means nothing more or less than “not what it appears to be be.” This can apply to who did it, how it was done, and whether anyone actually died or not.

There are both contrived false flags — these are pre-planned and carried out with the intent of deceiving the public to justify a war or economic crisis or crack down on a minority group — and after-the-fact yellow journalism, in which a normal accident is labeled an attack when it was not.

ARE THERE HISTORICAL EXAMPLES OF PROVEN FALSE FLAG EVENTS?

Yes. Global Research in Canada has published an superb list,

Among the most famous are the Reichstag fire, the USS Liberty, and 9/11 but almost every country including Third World countries has used this form of public deception.  For example, Israeli’s have dressed up as Palestinians and thrown rocks or even shot at Israeli soldiers to “justify” a follow-on massacre; Colombia has murdered civilians and then dressed them in uniforms after the fact. Every country does this in some fashion at some time.

The above article was so widely respected that it was turned into an online book also in hard copy published in 2019, Historically-Documented Admissions of False Flag Terror: A Concise Summary.

Prior to this book, which documents false flag events by twenty-four countries from Algeria to Venezuela.


YOU HAVE SAID PUBLICLY YOU RAN A SINGLE FALSE FLAG FOR CIA. WHAT CAN YOU TELL US ABOUT IT?

With a smile, not much. Although CIA has kindly approved my coming out from under clandestine cover, and also approved my published books focused on secret intelligence reform, my lifetime secrecy oath remains in effect. We sought to deceive a foreign government into believing something that was not true. No one died in the false flag operation for which I was responsible.

HAVE FALSE FLAG OPERATIONS OCCURRED WITHIN US BORDERS?

Absolutely. 9/11 is the most terrible, but after Barack Obama changed the Smith-Mundt Act to allow the US Government to propagandize the US public, previously forbidden, an entire false flag industry has been spawned, in part to increase the budgets for the Department of Homeland Security (DHS), the Federal Bureau of Investigation (FBI), and local police forces now vying for hand-me-down military equipment including tanks to use against the US public.

WHAT EVENTS IN THE USA DO YOU BELIEVE HAVE BEEN FALSE FLAGS?

9/11 (2001) is the mother of all modern false flags — that was an inside job between Dick Cheney and Donald Rumsfeld at the national level, key officials in New York and New Jersey, and the Zionists who started planning for 9/11 in 1988.

I consider the Sandy Hook (2012) and the Boston Bombing (2013) to have been the very first fully domestic modern false flags, both sponsored by the Federal Emergency Management Agency (FEMA), which was test-driving both the use of crisis actors and new national security warrants that terrorize local government employees into complicity and silence after the fact or face the prospect of going to jail, being sent to an insane asylum, or even killed — “suicided.”

Beyond that I would include Orlando (2016), where I documented seventy anomalies that I reported to the Director of the FBI without response, as well as Las Vegas (2017), Parkland (2018), Pittsburgh (2018), and most recently El Paso (2019). There are others, Fort Lauderdale and San Bernardino come to mind.

Please note that I distinguish between complex false flag operations and mass shootings in which there is generally a single mind-controlled patsy who generally dies as part of the deal. Certainly individuals can go insane and start shooting, but more often than not, any event with a body count above four is contrived and there are hidden shooters involved.

I would also point out that the extreme left focuses only on mass shootings by white people — black on black shootings such as occur so frequently in Chicago and Washington DC are ignored, as are “death by cop.” The police have killed over 3,740 people since the first day of 2009 and that is just the obvious deaths.  Extra-judicial killings disguised as crime or staged as accidental have not been tallied.

HOW DO YOU EVALUATE AN EVENT AS A POSSIBLE FALSE FLAG?

I have two models that I use, both shown below.

The first evaluates the specifics of the event.  Sadly, the FBI appears to be so complicit in covering up crimes by the government that absent a special Presidential “fly away” forensics team staffed by loyal military professionals, it is almost impossible to document the event before the location is completely cleansed.  There are four truth-tellers for me:

Is the body count too high for one shooter?

Does the blood and debris match the claimed body county?

Do witnesses report “men in black” shooters as happens so often?

Is the location razed to the ground within weeks if not days of the event?

Then there is the obvious: no bodies, no trauma ward overtime. We never see photos of the alleged dead, unless they are crisis actors playing dead. In Nigeria when there is a massacre we see real evidence of real bodies. Below is a photo from the Jonestown massacre. 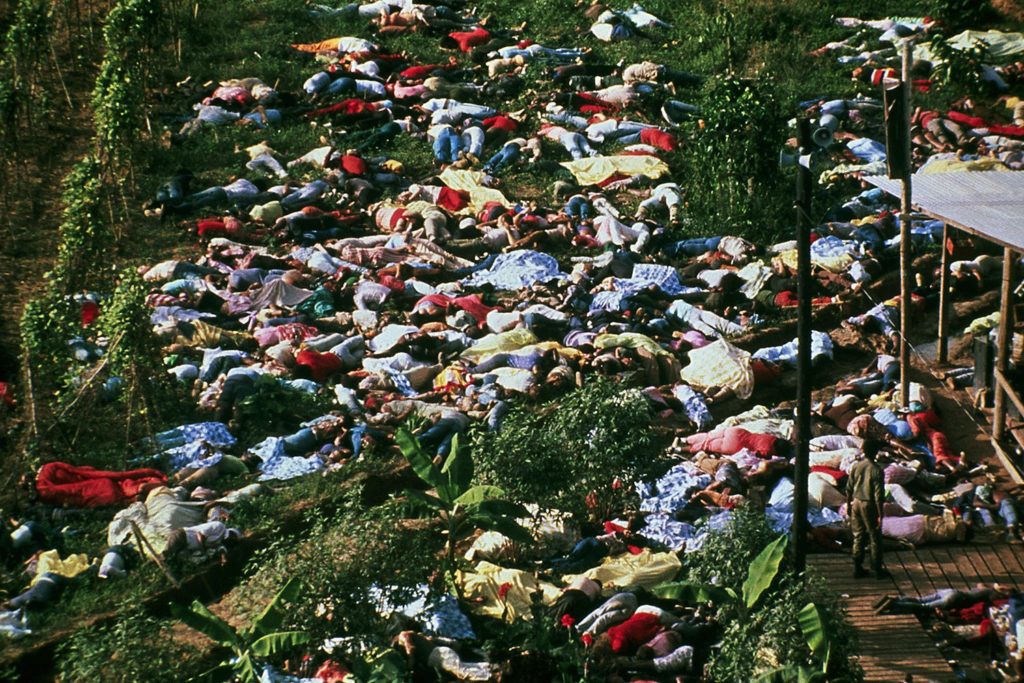 My second analysis graphic focuses on history, current needs, and the always relevant question, “who benefits?” I created the below graphic to think about the Paris false flags. 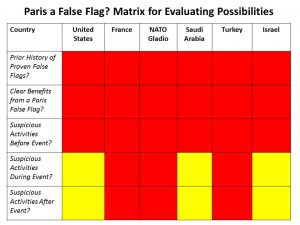 Most recently I have concluded that the New Zealand Mosque and the Notre Dame sacrificial burning were clear false flag operations.

ALL OF THESE SEEM VERY SPECULATIVE. CAN YOU DISCUSS THREE US FALSE FLAGS  BRIEFLY AND POINT US TOWARD DOCUMENTATION? 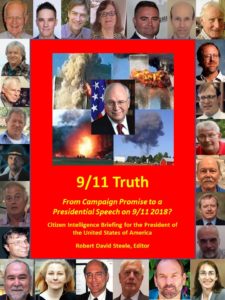 Planning began in 1988 when the Twin Towers, owned by the Port Authority, were condemned and the Environmental Protection Agency (EPA) declared that because of the asbestos and other toxins, the buildings would have to be dismantled by 2007 at the latest, and done so manually.  This created an immediate $2 billion liability for the Port Authority.

I believe that this was briefed to Benjamin Netanyhu and Dick Cheney, and planning began in 1990 at the latest, to convert this insurance liability into a combination of insurance fraud and false flag event.

In 2018, seeking to encourage the President to keep his promise, I brought together the top authorities on 9/11 including Peter Dale Scott, David Ray Griffin, and Richard Gage, and we created a bound volume of memoranda for the President that are free online at 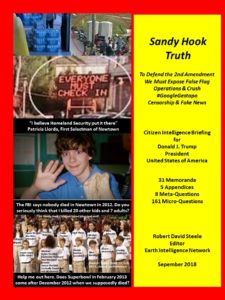 Sandy Hook was in my view the first official false flag event organized by FEMA for the explicit purpose of terrorizing the US public by manufacturing fear toward an Obama Administration objective — gun control — and a DHS objective: the massive expansion of both FEMA and the Transportation Security Administration (TSA) that is in gross violation of the 4th Amendment across the USA.

The government would have us believe that a retarded kid killed a large number of children some of whom appeared alive later to sing at the SuperBowl, in a vacated school with multiple signs of abandonment, and that the big DHS sign saying “everyone must check in” was added after the fact, not before.

I myself decided after the success of our 9/11 volume for the President, that a similar volume was needed on Sandy Hook, and that is available free online at 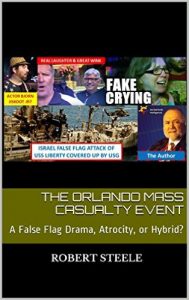 Orlando is the event that I myself chose to analyze in detail.  I identified seventy explicit anomalies across ten categories of inquiry, from who benefits to the shooter having airline tickets for his family to leave for San Francisco in a day or so, to the fact that there were eleven parking spots in what appears to have been a closed club, and no cars were ever produced for all of the people who allegedly died in the club. Being a patriotic citizen, I sent my analysis to the Director of the FBI via tracked mail asking if I was wrong on any point, and never received a reply. My analysis is free online at 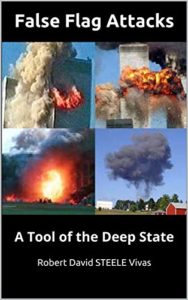 I will repeat what I said during my Forest Gump moment speaking to thousands at Rolling Thunder in front of the Lincoln Memorial: the President cannot defend the 2nd Amendment without confronting the reality that most of these mass shootings are either fully planned false flag events, or mind-controlled patsies sent out to kill in furtherance of the gun control agenda.

False flag events, both within the USA and abroad such as the false flag sarin gas attacks in Syria, or the recent false flag attack against the Saudi refinery, are a tool of the Deep State that our President is striving to take down.  We cannot take down the Deep State without taking on both false flags, and the pedophilia extortion that the Mossad carries out across the USA with the apparent complicity of the CIA and the FBI.  Jeffrey Epstein was the tip of the iceberg.

My free online book about false flag attacks as a tool of the Deep State is here: