In fact, there is compelling evidence that Manson was a figure somewhat similar to Jeffrey Epstein, who was connected to high-profile figures through a child trafficking operation. It is often underplayed in dramatizations about the Manson family, but many of the young hippies in the cult were actually underage girls. O’Neill’s research suggests that Manson was popular in Hollywood because he trafficked these children to various record executives, famous entertainers, and rich patrons.

The case becomes even more suspicious when considering that Manson and his cult seemed to be protected by the government and local law enforcement. 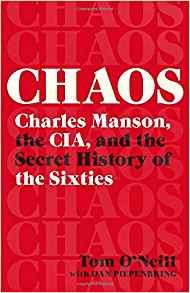 O’Neill’s quest for the truth led him from reclusive celebrities to seasoned spies, from San Francisco’s summer of love to the shadowy sites of the CIA’s mind-control experiments, on a trail rife with shady cover-ups and suspicious coincidences. The product of two decades of reporting, hundreds of new interviews, and dozens of never-before-seen documents from the LAPD, the FBI, and the CIA, CHAOS mounts an argument that could be, according to Los Angeles Deputy District Attorney Steven Kay, strong enough to overturn the verdicts on the Manson murders. This is a book that overturns our understanding of a pivotal time in American history.

As you likely already know Robert, the whole Laurel Canyon situation started before WW2, involved a secret underground theater where satanic snuff films were made, then WW2 US propaganda videos for the US Army.

From there it spread to the OSS then the CIA in 1947 which created (under direction of MI-6 and Tavistock Institute) the whole Hippie drug movement, acid rock, then rock and roll–all done to neutralize a whole generation of American youth to make them drop out and abandon their nationalism and culture and to neutralize all antiwar sentiments that were increasing.

It was David McGowan (now apparently deceased) that documented a lot of this. All the top rock musicians lived in Laurel Canyon where many of their Army and Navy Intel fathers lived.

Laurel Canyon and the Manson false-flag with nobody dead are both deep x-rays into the secret world of Tavistock designed covert ops unleashed on the American People unbeknownst to them. Bugliosi of course was a company associate and was fully informed of all this, probably deeply compromised himself?