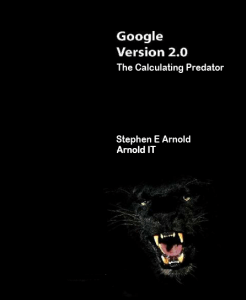 Google Version 2: The Calculating Predator is the public version of a series of reports prepared for clients in 2005 and 2007.

The topics covered in the monograph, published by a now defunct
publishing company, included an a review of Google’s database technology Bigtable which remains today the core data management system after more than 15 years since its invention, Google’s artificial intelligence activities, a review of Google’s video technology, its programmable search engine (a system likely to be of interest in upcoming government investigations of the company), and technologies enabling Google’s “walled garden.”

The monograph also explores Google’s technology for the enterprise. Many of these innovations are now features of Google’s cloud strategy, particularly the role of “containers.”

The monograph also explores Google’s generation of information; that is, Google as a net producer of content; for example, search results which are like encyclopedia pages, not just lists of results.

The final chapter of the 250 page monograph looks ahead (just from a perspective removed by 15 years).

The primary source material for the monograph is Google’s patent documents. Illustrations and diagrams are included.

A pre-publication version of the monograph can be obtained by writing darkcyber333@yandex.com. The price is $45 US payable via PayPal prior to our sending a download url to the purchaser.

Phi Beta Iota: Strongly recommended.  The Department of Justice would do well to add Mr. Arnold to its consulting team for the RICO investigation of Google as well as Facebook, MeetUp, Twitter, and YouTube. Mr. Arnold is now documenting the same predatory behavior by Amazon. It seems to take the government and the public between 15 and 25 years to wake up to warnings from those who see the dangers in the instant.