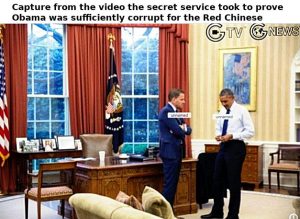 Source [We take no responsibility for any content at Source]

Safety Copy of Text Below the Fold

HUNTER HARD DRIVE BUST: Want to know how compromised even the secret service is?

Hunter requested the secret service set up a hidden video camera in the oval office at the request of Xi, before Hunter met with Obama in the oval office. The secret service itself recorded Hunter’s meeting with Obama, and in this meeting key items proving Obama was sufficiently compromised were discussed. The secret service then gave the recording to Hunter, who brought it to Xi and upon viewing this, Xi decided it was safe to continue with the blackmail of American politicians and the rest of the Biden corruption.

Early on Guo was only posting still captures from the video, to “terrify whoever may be concerned” without saying what it was. But anyone who was involved with this would know. I’d say doing that was a mistake, he should have said it the way it is being stated now BECAUSE TIME IS RUNNING OUT.

Look people, even the secret service is corrupted. They made the recording for Xi. And I do not know why American jewry is allowing this to continue by censoring everything in the media UNLESS. THEY. TOTALLY. CONTROL. XI. face it, they have GOT TO own him, this would not be allowed to continue in silence any other way.

Our very own secret service turned it’s back on EVEN OBAMA on behalf of the Bidens and red Chinese. The corruption is so much worse than anyone imagined that even I am shocked. NOT VOTING THIS TIME IS IN ITSELF A VOTE TO DESTROY AMERICA, I know, I know – your vote may not be counted anyway but it will sure as hell make the steal more difficult by increasing the difficulty of burying our voices by one vote more. GET OUT AND VOTE, we are on the precipice of doom.

Take a look at this latest announcement by Trump. It starts with him touching on Biden corruption but it then, after appearing to end re-starts with him explaining that the swamp was far worse than he knew about and ends with him telling everyone to vote EARLY and to “not let them take your vote away.” I said right in the beginning that all votes have already been cast for Biden and that you have to re-set it with in-person voting. Trump, for obvious political reasons did not say it so bluntly, but he does say it. He does not say “don’t throw your vote away” or “don’t be lazy, get out and vote”, no, he says “do not let them take your vote away.” HE KNOWS.

It is clearly obvious they are going to steal this election because that is all the MSM is talking about – “election interference” and “not transfering power” with the meta talk being DO NOT INTERFERE WITH OUR COUP.