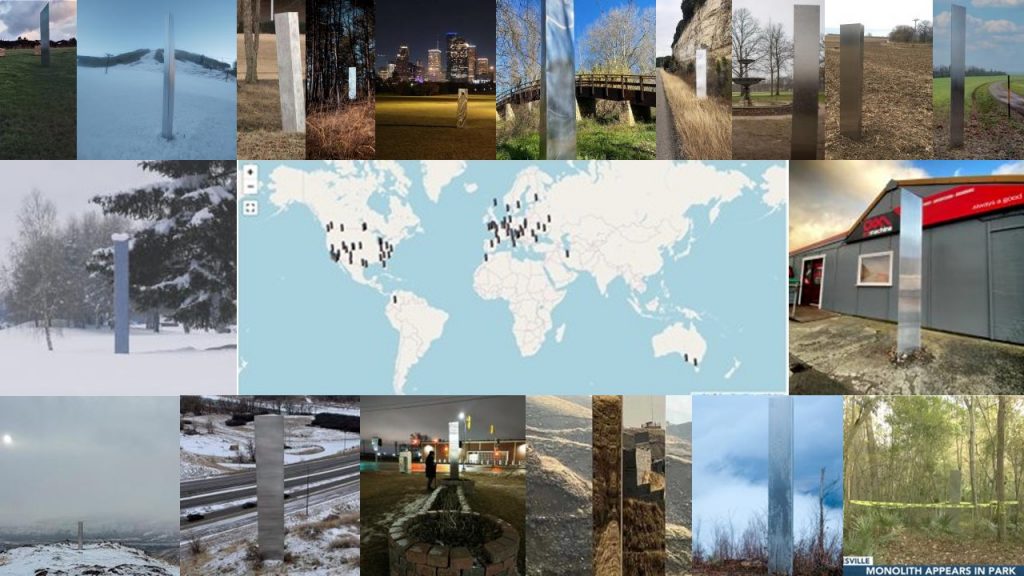 I feel strongly that these monoliths are indeed being seeded by aliens….good aliens. Now there are 80 of them, and I doubt an artist has something to do with 80 of these being placed. Here is a map showing their locations. From what I heard from someone who is in contact with the Galactic Federation, these have a multi purpose when activated. They are not yet activated, but have something to do with the new energies which will bath our planet with harmony and well being. Check out this map. It started with a couple, then 4 and now 80 and growing.

Phi Beta Iota: We are seeking additional information including electromagnetic and manufacturing analysis. Until then this is somewhere between fad/meme and precursor to alien disclosure/invasion. It could also be  a desperate final attempt by the Deep State to justify a One World Government. We tend to doubt the beneficial alien explanation for the simple reason that benign advanced stellar civilizations need no such artifacts — and their absense from the Southern Hemisphere is quite suspicious.

They are all fake. Paladians are laughing.

This is, I opine, emergent behavior. The measurements for the monoliths are on this web site: https://en.wikipedia.org/wiki/Monolith_(Space_Odyssey).

Unemployed nerds and pranksters. Plywood. Aluminum foil. Existing news coverage. Sounds like a fun project for those who were in
the high school science club.

BlossomGoodChild.com: Good morning. I am of course, going to start with the topic of the Monoliths. Since we last ‘spoke’ many more ‘valid’ ones have been revealed in the strangest of places around the Globe. There is naturally much speculation and intrigue. Many are pranks it seems … yet, some have no explanation. So, perhaps I should just let you flow with it. Read more. 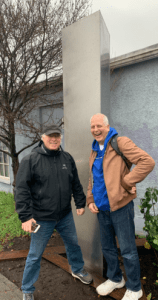 The monoliths have caused quite a stir.

I’m awaiting my friend, Len Satov, who introduced me to Ascension in 2008, to drive over to Venables Street, Vancouver, Canada, to see one that’s been “discovered” here recently. Could be a fake.

If the monoliths are a move towards Disclosure – and I consider them to be – I could see the cabal reacting by planting fakes around the world.

It seems to me to be part of some sort of operation blue beam fake end times show. It is sort of like an initiation ceremony to set the world up for a new system to replace the post WWII Bretton Woods framework..

My opinion from testing is that all these monoliths are just another distraction put on earth by aliens with agendas, most likely the Nordics, who just happen to be allied with the Reptilians and the Greys sometimes. Every being has an agenda and that agenda may or may not coincide with our priorities of Free Will. At a minimum, the monoliths are distracting our attention at a most difficult time on earth where we should keep our eye on the ball or Cabal to make sure that we don’t get mind controlled again or still.

It could also be a harbinger of that so-called Alien Invasion that is supposed to happen sometime about now.  I would not worry about it as our Secret Space Force has it all well in hand and they would never let that happen. Randy Cramer of Radiant Guard that is 10 times more powerful than Solar Worden, which is severely compromised.  Randy is one bad ass Marine.

You may recall the Nordics, which William Tompkins said were giving him information about how to build rockets when other more secret parts of our government were using anti-gravity.

BTW, so much for NASA’s prediction that the sun would go dark from 12/16/20 to 12/2/20. I pay attention to Ben Davidson at https://SuspiciousObservers.org for my sun observations.

I don’t know, Robert. Although the timing would seem to support some kind of Disclosure process, any opinion I would have would be complete speculation.

I received a letter from Mark Richards (Captain Mark Richards who I have interviewed 12 times at Solano Prison in California) and he hinted that there is an ET connection to the monoliths. I will look back over his recent letter to get some of his exact wording for those interested.

What I am getting is an AI -alien AI – Secret Space joint effort…leading up to a limited disclosure event.

One can’t help but connect them to the monolith in 2001 a Space Odyssey. That allusion cannot be ignored.

It’s pure cabal esoteric fakery. Those monoliths when they are true are complete mysteries even for our stellar cousins.

For those interested in monoliths, I would encourage you to watch the latest Cosmic Agency video on this subject here .  According to Anéeka, the monoliths that have recently appeared on the planet are NOT real monoliths.  They are part of a psyop on the part of secret societies to influence and/or prepare humanity for some future “event”.  Monoliths tend to appear in times of transition and are based on ancient Atlantean knowledge.  Those who possess this knowledge are fabricating fake monoliths to mislead humanity.

Real monoliths obey a strict geometry of 9 x 4 x 2 and are made of anti-matter.  They are indestructible.  No one puts them there – they just happen.  They have even been observed floating in space. They are the opposite of a portal – a material manifestation of the universal law that says for everything that exists, there is an opposite.  Think of the monolith as the door and the portal as the door frame.  Sometimes the polarity of a monolith is reversed, and it becomes a portal.  Anéeka claims that Stanley Kubrick had a better understanding of monoliths than most as demonstrated in the movie “2001 A Space Odyssey”.