The US Intelligence Community does not lack for well-intentioned leaders, but somehow, despite the efforts of Jim Schlesinger in the 1970’s and many others through the 1980’s and 1990’s and into the new century, transformation eludes us.  We speculate that secrecy has a great deal to do with it–and one leader commented, the only person who could brief him on a program he wanted to terminate was the person who stood to lose their fiefdom if he did.  Below is the single page summing up 20 years of endeavor, as delivered to the DNI.  It remains valid today (6 August 2009). 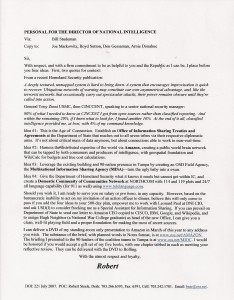 Dr. Joseph Markowitz is without question the most qualified Open Source Intelligence (OSINT) pioneer in the ranks of those presently in or retired from U.S. government service.  As the only real chief of the Community Open Source Program Office (COSPO) he tried valiantly to nurture a program being systematically undermined by both the leadership and the traditional broadcast monitoring service.  When he moved on to advise the Defense Science Board, he served America well by helping them fully integrate the need for both defense open source information collection and exploitation, and defense information sharing with non-governmental organizations.  His persistent but diplomatic efforts merit our greatest regard.

Clicking on the photograph leads to the 1995 Strategic Plan that was rejected by a series of Directors of Central Intelligence (DCI) for all the wrong reasons.  Since then Dr. Markowitz has written the Open Source Intelligence (OSINT) elements of all the major Defense Science Board (DSB) reports,  and it is to his credit, as well as that of Don Gessaman, that the most senior civilians in the Office of Management and Budget (OMB) fully understand both the draconian short-falls in our capaiblity, and the ease with which they could be resolved.

Don Gessaman was the Deputy Associate  Director for National Security at the Office of Management and Budget (OMB) for over a decade, and in that capacity managed the oversight, as the most senior civil servant in OMB for defense, diplomacy, aid, and intelligence.  Today Kathleen Peroff manages this money, over one trillion dollars a year, unqiue for being the most disposable and directable part of the US Government’s budget.  during this period Arnie Donahue was Chief of the C4I Branch, and served for several years, until 1997, after Don retired.  Both of them contributed to the budget numbers contained in ON INTELLIGENCE: Spies and Secrecy in an Open World.

In 2000 we almost got a Presidential Budget Initiative for the Open Source Agency, but Sean O’Keefe, the Deputy Director of OMB who approved the initiative at a first year start of $125 million, moved to be the leader of the National Aeronautics and Space Administration (NASA) and we lost our chance to leverage Sean O’Keefe’s unique appreciation for the importance of this initative.

He is the principal author of the books shown here, most recently issued in 2006 and generally used by incoming Presidents and new Directors of OMB to orient their political client base and appointees.  The book can be ordered from the EOP Foundation, 819 7th Street, N.W., Washington, D.C. 200001, telephone (2020) 833.8940.

Below is a summary of Don’s presentation to OSS ’21.

During the August recess this got in to several SASC staff that were contemplating an OSINT initiative.  Don Gessman provided the recommended breakdown including an earmarked amount for inter-agency OSINT.  The Department of Defense and the Combatant Commands have always been the central organizing base for a national OSINT program, which would be funded by non-reimbursable defense allocation.

With help from Don Gessaman, Sean O’Keefe at Office of Management and Budget (OMB) was briefied on the need for a national Open Source Program, and agreed in principle to a $125 million first year start.  Then he moved to the National and Aeronautics Administration, and the opportunity for a Presidential Initiative was lost.