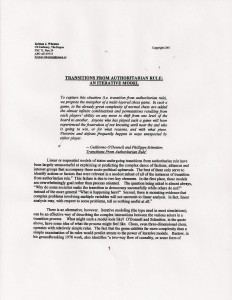 Kristan Wheaton, the Army field grade officer who predicted the Balkan meltdown years in advance but could not get command attention (he subsequently wrote a book,The Warning Solution : Intelligent Analysis in the Age of Information Overload that needs to be updated and reprinted.  The bottom line: policymakers are dealing with $50 billion problems “right now” and the intellgence profession has not matured to the point that it can compell attention to $1 billion “peaceful preventive measures” as General Al Gray, USMC, called them in his article, “Global Intelligence Challenges in the 1990’s,” American Intelligence Journal (winter 1989-1990).

The OTHER big problem that the U.S. Government has, apart from the corruption of Congress and the two-party political systems that services special intersts at the expense of the public interest, is the casual acceptance by the U.S. Government of authoritarian regimes.  Indeed, of 44 dictatorships on the planet, all but two (North Korea and Cuba) are “best pals” with the U.S. Government because they all support rendition and torture and being “tough on terrorism” in return for liberal unaccountable funds from the U.S. taxpayer.

Achieving a prosperous world at peace demands and end to the concentration of wealth by illicit means.  That in turn demands an end to dictatorial governments and a restoration of the rights of indigenous peoples.  It is in that context that this paper matters.