PRINCETON, NJ — Nine years after the terrorist attacks of Sept. 11, 2001, 1% of Americans mention terrorism as the most important problem facing the country, down from 46% just after the attacks.

Still, Americans rated economic issues such as the economy, jobs, and federal spending, as well as corruption in government and healthcare, even higher. They rated terrorism as more important than immigration, Afghanistan, and the environment. 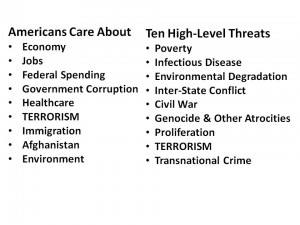 US versus Global Cares

Review: Screwed–The Undeclared War Against the Middle Class — And What We Can Do About It