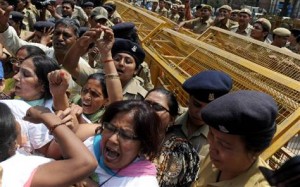 Activists from India’s main opposition Bharatiya Janata Party (BJP) women’s wing shout slogans against the Congress-led government during a protest against an increase in milk, vegetables and food prices in New Delhi on April 1, 2010. The BJP activists protested against the price hikes of essential commodities. Food inflation is still at 17 percent according to official figures.

Strained by rising demand and battered by bad weather, the global food supply chain is stretched to the limit, sending prices soaring and sparking concerns about a repeat of food riots last seen three years ago.

Signs of the strain can be found from Australia to Argentina, Canada to Russia

Phi Beta Iota: Absent a radical break-through in energy that enables water desalination and purification, the combined collapse of the global financial system and the global food system could mark the beginning of a quarter century of “tribulation.”