Wikileaks just released a motherload of info on the taboo subject of Saudi Arabian royal rents.

The 1996 cable — entitled “Saudi Royal Wealth: Where do they get all that money?” — describes legal and illegal ways that royals grab money, according to Reuters.

For legal ways, there’s the monthly allowance given to thousands of princes and princesses. This ranged from $800 a month for “the lowliest member of the most remote branch of the family” to $270,000 a month for sons of Abdul-Aziz Ibn Saud. 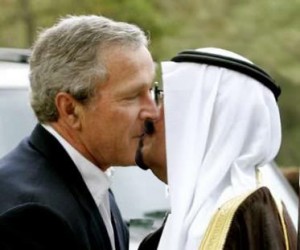 For illegal ways, schemes include skimming $10 billion yearly from off-budget projects related to defense and infrastructure. One Saudi prince complained: “One million barrels per day” go entirely to “five or six princes.”

It’s nothing to start a revolution over, but the sheer scale of payments might anger the Saudi people. The big concessionary social-welfare package offered last week was worth only $37 billion. Big anti-government protests are scheduled for later in March.

See 11 Countries That Could Be The Next Egypt >

Phi Beta Iota: The cable is also valuable in demonstrating that the US Government  (regardless of party in power) chose to sell our soul for Saudi crude.

Review: Sleeping With the Devil: How Washington Sold Our Soul for Saudi Crude

The Saudi Royals Are Traitors To Islam

Review: Web of Deceit: The History of Western Complicity in Iraq, from Churchill to Kennedy to George W. Bush