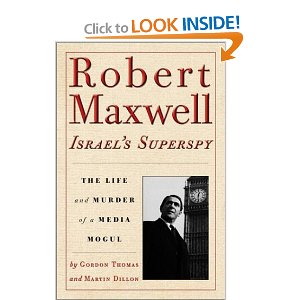 Phi Beta Iota:  The following is a comment posted  to the reviewby Robert Steele of Robert Maxwell, Israel’s Superspy: The Life and Murder of a Media Mogul (Carroll & Graf, 2002).  It is a combination of Constitutional and religious counterintelligence commentary that we found to be encouraging–most American Jews are not Zionist sayanim [traitors to the USA, clandestine assets for the Mossad].

Oh c’mon as Jew I’m offended. You doing that only proves him right, jeez dude way to be reactionary. It’s more about the state of Israel. There are plenty of American Jews that see Israelis as arrogant to say the least…

I’m an American first. Well….it’s not like the people that run the place have any sense of loyalty beyond money and family so to my own ears they sound hallow, but it’s the only thing we have left right? Anyway Sanayim was removed from wikipedia so waybackmachine led me to a former Mossad intelligence officer Victor_Ostrovsky who actually admitted to it’s existence and wrote at length.

Also on censorship, those who fear something usually react. So I take the side of whoever says something, provides evidence and then doesn’t have a history of trying to crush the dissenting opinion of others who disagree with them. Even if I categorically disagree with their conclusions, the reactionary, who hides behind “such and such is inflammatory and therefore he must be REPORTED to protect the minds and hearts of others is even less of a human being and even more reproachable. I’m a black biracial Jew so I know what being persecuted is.

In 7th grade re-enacting a supreme court case about media censorship we were given hypotheticals as to what decisions we would make as justices. The important part about protecting the constitution is defending the rights of those you disagree with as long as they are non-violent and don’t impose on the civil liberties of others. Imagine the audacity of me being the only student in class writing that the klan should be able to march in Midtown Manhattan exercising their first amendment right…why you ask? So they could embarrass themselves, heck maybe even get punched in the face? You lose liberty when you aren’t willing to defend people you ideologically disagree with. Defend your convictions with fact by fact analysis and come to a conclusion that best supports the data.

Also that same year in 7th grade I learned what Nuclear Deterrence theory meant, what the Bush doctrine was, who George F Kennan Was, and most importantly what Project For New American Century is…all because of something called the 9/11 Commission Report I needed to make my case for the mock supreme court trial about whether a newspaper in Denver Colorado was breaching the espionage act by reporting on the environmental effects of government chemical testing. I was a middle schooler in the top class of a considerably bad school from South Jamaica Queens, in a lower middle class household. I did exceedingly well on standardized tests, but had a lax GPA.

I’m building this backstory to say what? That anything is possible from any ruling class(foreign or domestic)when Sarah Palin can be viewed as a credible running mate by over 40% of the voting block. Neoliberalism with the doublethink of Neoconservatism definitely proves the current regime of Israel and the policies of the United States government as the greatest threats to democracy the world has ever seen since the rise of the Third Reich.

This isn’t just a message to the above commenter, but anyone who’s on amazon scanning to be better informed. Be self-sufficient and remember to research, research, research, regardless of whatever your religion, class, or creed may do to disarm you emotionally.