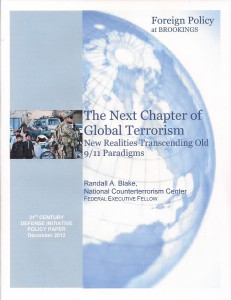 Phi Beta Iota:  The paper is a  pseudo-official narrative devoid of critical thinking.  The notes are terrible, the assumptions embedded without justification (e.g. USA becoming a net energy exporter — left unsaid, this assumes fracking and the Keystone Pipeline are allowed to be put over on an increasingly attentive public).  The bibliography is pretentious, striving to justify the immaculate conception of the author’s presumptions that are undocumented in the body and that avoid all informed questioning of the official narrative.  He gets two things right but does not understand that they are central: the US creates blowback in how it misbehaves overseas, and local and regional grievances have a life of their own with or without a purported Al Qaeda presence.  We know that 9/11 was not properly investigated (just as the JFK assassination and the USS Liberty were not properly investigated and were both covered up); we know a false narrative has been spun on 9/11 from day one; we are moderately certain Bin Laden died in 2000 and Al Qaeda was not behind 9/11; and we are moderately certain that various elements of the US Government are lying to each other (e.g. CIA lies to JSOG and the FBI), to Congress, and the public.  The media, notably the Washington Post, is complicit in this false narrative.  “The truth at any cost lowers all other costs.”  As long as screeds like this is published by the Brookings Institution, the ostensible front lobe of the Democratic brain, we know the US Government is not yet serious about intelligence with integrity.