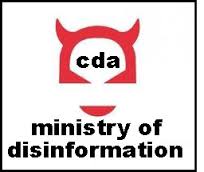 How to tell genuine reporting from an article manufactured to  produce the desired propaganda effect? The war in Iraq provides us plenty of interesting samples for a study of disinformation techniques.

Take the article “Basra Shiites Stage Revolt, Attack Government Troops”, published on March 26 in The Wall Street Journal Europe. Using its example, we will try to arm readers with basic principles of disinformation analysis that hopefully will allow them in the future to detect deception.

The title of the article sounds quite definitive. The article starts, however, with the mush less certain “Military officials said the Shiite population of Basra … appeared to be rising”. “Military officials” and “appeared to be” should immediately raise a red flag for a reader, especially given a mismatch with such a definitive title. Why “officials”? Were they speaking in a chorus? Or was each one providing a complementary piece of information? A genuine report certainly would tell us this and also name the officials or at least say why they cannot be identified.

Why “appears to be”? There are always specific reasons why something “appears to be”. For example, information about the uprising may be uncertain because it was supplied by an Iraqi defector who was not considered trustworthy and has not been confirmed from other sources. Again, every professional reporter understands that his job is to provide such details and it is exactly such details that make his reporting valuable, interesting, and memorable. If such all-important details are missing, this is a sure sign to suspect intentional disinformation.

Going further down the article, we see even more astonishing example of the same vagueness. “Reporters on the scene said that Iraqi troops were firing on the protesting citizens …” For an astute reader, this short sentence should raise a whole host of questions. Were the above-mentioned reporters Western media reporters embedded with the troops? What was their location and the distance from which they observed the event?

Obviously, being inside a besieged city with riots going on is an exceedingly dangerous business. Why were the names of the reporters distinguished by such shining bravery concealed from us, instead of being proclaimed with pride? Why do they not want to tell us where they were observing from and how they managed to get there? In any case, under the circumstances, being closer to the scene than the distance of a rifle shot, say one kilometer, merits a special explanation. Now, an interesting question is, what are the visual clues allowing a reporter to distinguish, at such distance, between an uprising and, let’s say, troops firing on looters or many other possible explanations for the same observation?

The only cue I can think of is not visual, but an aural cue from an editor requesting the reporter to report what we cannot explain as anything but an attempt of intentional disinformation. Given a very specific nature of the disinformation produced in this particular case, its obvious potential effect on both resisting Iraqis and anti-war public opinion, we cannot see any other explanation for it, except that The Wall Street Journal directly collaborates with the psychological warfare department in the Pentagon.

Some unexpected light on the story is shed in “UK: Iraq to feel backlash in Basra” posted on CNN.com also on March 26. In this article, the original report on a civilian revolt is attributed to “the British military authorities and journalists”, again unnamed. Here, the chorus of “the officials” singing in unison with “journalists” makes the somewhat more specific and exceedingly bizarre statement: “We have radars, that, by tracing the trajectory of mortar rounds, are able to work out the source, as well as the target location, which in this case were civilians in Basra.” So, now we know that the uprising in Basra was detected by British officials and journalists watching a radar screen! This amazing British radar can even tell an Iraqi official from a simple citizen and a civilian from a soldier! Moreover, it apparently can read minds and determine the reasons people fire on each other!

Truly, there is a big lie in the information attributed to British officials. Or maybe I am wrong and this is an example of the famous British sense of humor deployed to get rid of pestering American correspondents? Chorus of American correspondents: “Is there an uprising going on in Basra? There must be. My editor told me to report it. You say, how would you know? That’s impossible, my editor told me …” British official: “All right, chaps. I see it on the radar.” Sounds of cellphone dialling and keyboards rattling …

To conclude: Remember the following first rule of disinformation analysis: truth is specific, lie is vague. Always look for palpable details in reporting and if the picture is not in focus, there must be reasons for it.

Want to know the names of rising stars of disinformation to watch? The Wall Street Journal article was “compiled” by Matt Murray in New York from reports by Christopher Cooper in Doha, Qatar, Carla Anne Robbins and Greg Jaffe in Washington, and Helene Cooper with the US Army’s Third Infantry Division in Iraq.

Phi Beta Iota:  Our motto is “the truth at any cost lowers all other costs.” The acme of skill for any citizen — not only for so-called professional intelligence officers — is to detect the truth and create ethical evidence-based decision support for any decision.