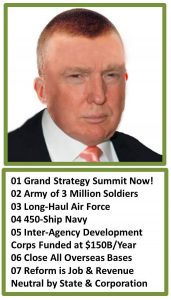 If I am elected President I will personally lead a Grand Strategy Summit.

Full Text Below  the Fold.

If I am elected President I will close all US military bases overseas.

If I am elected President I will build a 450-ship Navy, an air-mobile Army of no less than 3 million soldiers, and a long-haul Air Force.

If I am elected President I will transfer $150 billion a year from military spending to diplomatic and development spending to include an Inter-Agency Development Corps and an Open Source Agency that propagates free energy, unlimited desalinated water, free cellular and Internet access, hence education for all. We will create peace and prosperity for all as the fastest cheapest means of ending the global threat from tens of millions of displaced persons and illegal immigrants created by our support for dictators and elective wars.

If I am elected President, we will stop trying to control the world at the point of a gun for the benefit of bankers and against the public interest.

If I am elected President, our military will stay home and help rebuild America while being ready to deliver great force with great precision anywhere in the world if necessary.

If I am elected President I will assure the employment of every citizen who seeks a job, on a full-time basis with benefits; I will provide truthful information via a hand-held app to every citizen on what is actually in all these horrible products we are drinking and eating; and I will renegotiate student and medical and small business debt or I will declare a debt jubilee and give you all a presidential pardon while terminating the central banking power in the USA.

Rooted in a Grand Strategy, evidence-based national security planning, programming, and budgeting can eliminate waste, create enormous powerful military capabilities, and revitalize the economy by focusing on the public interest, not special interests.

NOTE: A sanitized version of this memorandum has been provided to the Johnson and Stein campaigns. The Clinton campaign is committed to the status quo.