Reprinted in full from behind the author's subscription wall, with permission. We consider Wayne Madsen to be one of the few great investigative journalists of our time, along with Seymour Hersh, David Kaplan, Robert Parry, and John Pilger.

Although the Central Intelligence Agency has had a long history of undermining presidents-elect and prime ministers-elect in other countries, the United States has never witnessed the intelligence agency so blatantly attempting to politically weaken a U.S. president-elect just a few weeks prior to the inauguration. What the CIA is doing in forcing Donald Trump into shifting from his campaign promise of restoring good relations with Russia to one of outright hostility to Moscow — favored by the CIA, Director of National Intelligence (DNI), and the neo-conservatives within the Republican and Democratic party establishments — is nothing less than an overt threat to American democracy.

Amid pressure from the CIA, DNI, National Security Agency, and the Department of Defense's under-secretariat for Intelligence, Trump has vowed to revamp the U.S. Intelligence Community. Trump has also questioned the politicization of U.S. intelligence, particularly the January 5 Senate Foreign Relations Committee testimony of DNI James Clapper, NSA director Mike Rogers, and Undersecretary of Defense for Intelligence Marcel Lettre. Clapper, in particular, not only called out Russia for hacking election-related computers at the Democratic National Committee but also using “fake news, social media and RT to influence the recent US elections.” That was a slap at Trump's incoming national security adviser, former Defense Intelligence Agency chief retired Lt. Gen. Michael Flynn, who stood accused of re-tweeting, along with his son, “fake news.”

Clapper not only used the Senate Armed Service Committee hearing to rant about Russian hacking of U.S. election-related computers but used the occasion to push for a U.S. government propaganda agency to counteract not only Russia but also WikiLeaks, social media, and any news source that disagreed with U.S. government policy. Clapper said, “We could do with having a USIA [U.S. Information Agency] on steroids to fight this information war a lot more aggressively than we’re doing right now.” The U.S. has moved so far to the right, it should be recalled that it was uber-conservative Republican Senator Jesse Helms (R-NC), the chairman of the Senate Foreign Relations Committee, who pushed for USIA to be eliminated in 1999 because it represented too powerful a U.S. government propaganda arm that was ultimately beholden to the Secretary of State. Now, Clapper does not believe USIA was powerful enough, a stand that would make Helms turn over in his grave.

Clapper had particular disdain for RT, the Russian government-supported global satellite news network. He said, “RT was very active in promoting a particular point of view, disparaging our system, our alleged hypocrisy about human rights, etc. Whatever crack, fissure they could find in our tapestry, they would exploit it.” Clapper's statement had nothing to do with the stated purpose of the hearing, Russian cyber-intrusions into the 2016 U.S. election. Under McCain's constipated chairmanship, the hearing devolved into constant Russia-bashing by Clapper, Rogers, Lettre, McCain, Graham, and Senators Tom Cotton (R-AR) and Ben Cardin (D-MD). Cardin intends to propose legislation that will increase sanctions on Russia. Cardin's only interest is to advance the Russia destabilization goals of George Soros and exiled anti-Vladimir Putin Russian tax cheats and oligarchs Mikhail Khodorkovsky and Leonid Nevzlin, all supported by Cardin's puppet masters that include the American Israel Public Affairs Committee (AIPAC), Anti-Defamation League (ADL), and American Jewish Committee. It is also the case that Cardin, Soros, Khodorkovsky, and Nevzlin all happen to be Jewish.

The Bobbsey Twins who advocate nothing less than an all-out U.S.-Russian war, Senators John McCain (R-AZ) and Lindsey Graham (R-SC), were prepped by the U.S. Intelligence Community to rattle the sabers against Russia. Before an approving Clapper, Rogers, and Lettre, Graham issued an unprecedented warning to a president-elect about his need to kow-tow before the U.S. Intelligence Community, “Mr. President-elect, when you listen to these people, you can be skeptical, but understand, they’re the best among us, and they’re trying to protect us.” As for Russia, Graham, summoning up his usual persona of a hysterical Southern belle with a sudden onset of the vapors, declared, “Ladies and gentlemen, it is time now not to throw pebbles but to throw rocks.”

The CIA can easily manipulate the two neo-con senators because of the blackmail it has on both. McCain's intelligence dossier, as previously reported by WMR, contains details of his USS Forrestal flight deck “horseplay” antics with his A-4 fighter. McCain's July 1967 dangerous “wet start” of his A-4 resulted in the deadliest ship fire, not caused by combat, in the history of the U.S. Navy. CIA files are also bulging with still-classified details of the information McCain spilled to his North Vietnamese and Soviet interrogators while a prisoner-of-war from 1967 to 1972. McCain was so loose-lipped about Navy operational schedules and tactics, his fellow POWs nicknamed the son of Navy Admiral John S. McCain, Jr., then the Commander of U.S. Pacific Forces, “songbird.”

Then there is the information never publicly revealed by the Senate Ethics Committee about the amount of money McCain illegally took from Lincoln Savings and Loan chairman Charles Keating, enough money to have kicked McCain out of the Senate and into a federal prison. What the CIA has on McCain is enough collateral to ensure that he echoes everything he is told by Langley, including his warning to Trump that Russia's hacking threatens the “unraveling” McCain's precious “world order.” However, McCain's “world order” is represented by neo-Nazis and fascists ruling Ukraine, the outbreak of war with Russia in Europe and the Caucasus, Sunni jihadists taking over Syria and Lebanon, a joint U.S.-Israeli war with Iran, illegal migrants continuing to stream into the United States from Mexico and into Europe from the Middle East and North Africa, and a continuing freeze in U.S. relations with Cuba.

As for the goods the CIA has on Graham, homosexuality may no longer be taboo in the U.S. military but it was while Graham served as a reserve officer in the Air Force Judge Advocate General corps for most of his 33 years in the reserve prior to his retirement in 2015. In Graham's home state of South Carolina, gays serving openly in the military has never been a popular cause. Because of South Carolina's large number of military veterans Graham has tried to keep his gay life style a secret from his constituents, but to little avail. Reporters for The Statenewspaper in Columbia are well aware of Graham's sexual orientation but publicly reporting it because of pressure from the state's Republican Party establishment.

While attending the National Press Club's Fourth Estate dinner honoring CBS newsman Bob Schieffer on October 15, 2010, this editor was on the receiving end of a very drunk Graham, at the very end of the festivities and after Schieffer and his country band stopped playing, leaning on me and asking where “we” would continue to party. I replied that “I” was heading home to Arlington, Virginia and was calling it a night. At about the same time, Graham's aide came up, gave me a rolling eyes apologetic glance, and told the senator his car was outside and that it was time to leave. The warnings about Graham from the reporters with The State all made a world of sense as Graham staggered with his aide from the press club's ballroom. The CIA very likely has photos of Graham, a lifelong bachelor, when he did not leave DC parties unaccompanied. 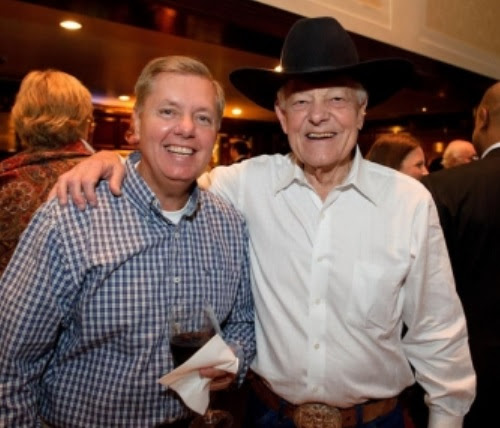 Lindsey Graham [left] and Bob Schieffer [right] the night in 2010 when Graham was looking for a guy to “party” with after hours. The CIA, which is no stranger to the prostitution game — female and male — has probably supplied Graham with a number of after-party companions.

Senator Cotton echoed the anti-Russian theme during the McCain hearing. Cotton also has a problem with CIA blackmail. As WMR previously reported, Cotton, a former Army Ranger who served in Iraq and Afghanistan and a close colleague of Graham, was found to have been running political ads on GRINDR, a smart phone application for gay men looking to hook up with other gay men, during his 2014 senate campaign. WMR also reported that Cotton, both during his time as a member of the U.S. Army's “Old Guard” at Arlington National Cemetery and as a member of the U.S. House of Representatives, was a frequent customer of JR's, a well-known gay bar in Washington, DC's primarily-gay Dupont Circle neighborhood. If the CIA continues to follow precedent, it has plenty of incriminating evidence on Cotton, who hastily got married in March 2014 during his Senate campaign in Arkansas. It is no coincidence that the CIA's major anti-Russia activists on the Armed Services Committee are the immensely blackmailable McCain, Graham, and Cotton.

McCain did not have his own way with all the statements by committee members. For example, Senator Thom Tillis (R-NC) accurately described America's own sordid track record on influencing foreign elections, stating that the U.S. was responsible for
influencing elections “more than twice as often as Russia has been accused of.” 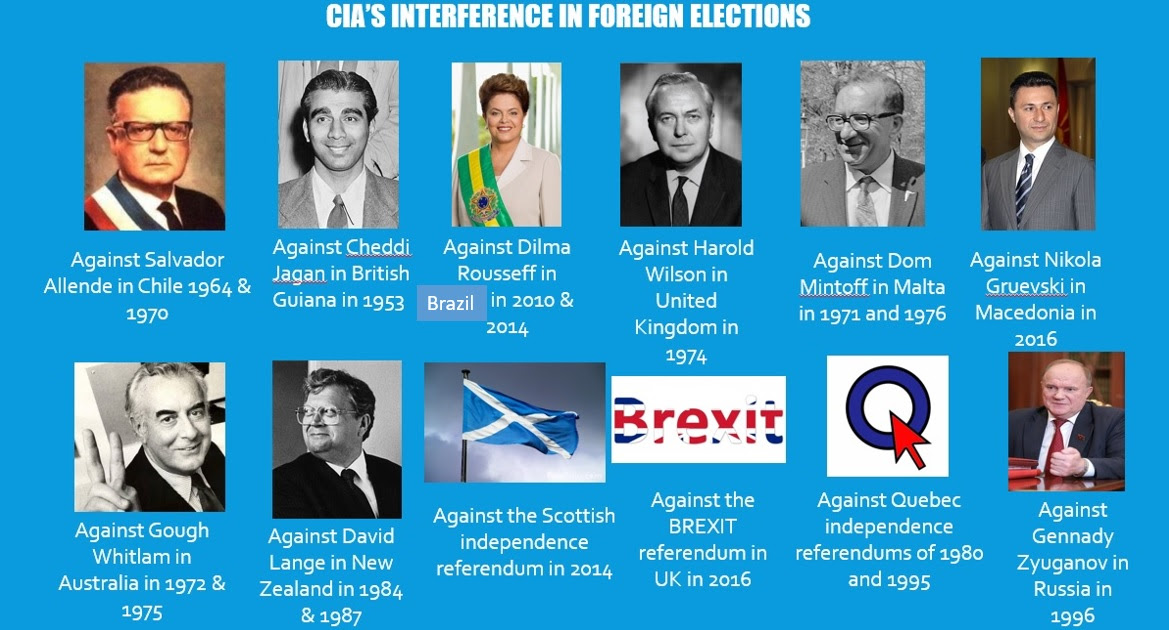 On the House side, the CIA also has its sycophants, including House Homeland Security Committee chairman Michael McCaul (R-TX); Representative Will Hurd (R-TX), a former CIA clandestine operative; and ranking Democrat on the Intelligence Committee, Adam Schiff. McCaul is still sore that Trump did not nominate him to be Secretary of Homeland Security. Other Trump administration prospective candidates, apparently rejected because of opposition to their neocon credentials, are also taking the opportunity of the unprecedented rift between Trump and the intelligence agencies to not only continue to bash Russia but also Trump. These include former CIA director James Woolsey, who severed all links with Trump, and former unconfirmed U.S. ambassador to the UN John Bolton, who has not, as widely expected, been tapped to be Deputy Secretary of State under nominee Rex Tillerson. Bolton recently said that sanctions were not enough against Russia and that what Russia needed was to “feel pain.” That is directly out of sync with Tillerson's policy of a seeking close detente with Moscow.

ROBERT STEELE: I am quite certain that most senior Members of Congress are being blackmailed by various parties including NSA, CIA, the Vatican, and the Mossad, among others. This is one reason why Donald Trump needs to have both an Electoral Reform Act (to free members of financial supplicancy) and a Truth & Reconciliation approach to the future. A revitalized FBI, cleansed of its pedophile, Opus Dei, Zionist, and other “protectors,” could be used to debrief, forever indemnify, and in some cases double back our hapless Members against the domestic and foreign enemies that have undermined the integrity of our Congress.

The Trump “Intelligence” Briefing Has No Proof At All: Assessing Russian Activities and Intentions in Recent US Elections UPDATE 4 Tony Shaffer Wayne Madsen NSA Anon

Robert Steele: Memorandum for the President-Elect on Need for an Open Source Agency