Treason on the left, apathy in the White House?

The Time Has Come To Stop The War On Free Speech

If local authorities won’t do it, the Federal government must.

Freedom of Assembly is the first and most important right of the Bill of Rights. Today it is being denied in cities like Berkeley and Portland where local left-wing governments have contrived to deny rally permits while giving the masked thugs of their leftist Antifa allies a blank check to assault those whose views they oppose. 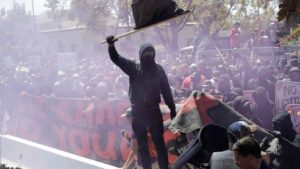