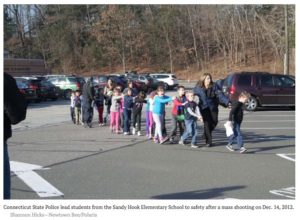 It turns out that a photograph that appears to show a policewoman escorting students from Sandy Hook to escape the shooting was staged as a crucial element of an elaborate hoax. It was taken by Shannon Hicks, a photographer and editor for The Newtown Bee, the local newspaper, and may have received the widest distribution of any photograph in history because the official narrative of 20 children and six adults having been shot and killed was emotionally traumatic and instilled fear into the hearts of every parent in America—indeed, no doubt, in the world.

It would turn out that Shannon Hicks took another (earlier) photo of what appears to be the same children in a different sequence. As Barry Soetoro, Esq., would observe, at least two of the boys appear in both photographs. They are identified here as “Boy #1” and as “Boy #2”. Which would mean, if these photographs were taken at face value as bona fide evacuations, then at least two of the children were evacuated twice! And the shadow cast by the figure in the foreground foreshadowed something else was very wrong. Parents were present at the scene. 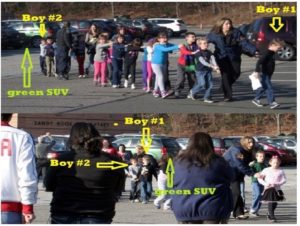 Notice, if you look between “Boy #2” and “Boy #1”, you can see several parents casually looking on as the policewoman works, which has prompted Dr. Fetzer to refer to this as “lounging at the massacre”! Had this had been a real shooting, who would have thought to make a call to bring parents to the scene? And if parents had come to the scene, does anyone think they would have stood around watching as she rearranged the kids to get a better shot? Does anyone doubt they would have grabbed their children and exited the premises by the fastest possible route to rush them to safety and then recover from a childhood trauma? Stunning

Notice originally a little girl in a pink sweater and short skirt was at the front of the line, but she was replaced by a taller little boy wearing a dark sweater and blue jeans. The parents show no stress or anxiety, where their body language is relaxed and composed. Shannon Hicks’ claim to have taken these photographs under conditions of extreme emergency is thereby contradicted.  For this staged photograph, she was made “Photographer of the Year” by the New England Newspaper and Press Association, where even NENPA experts appear to have been played. 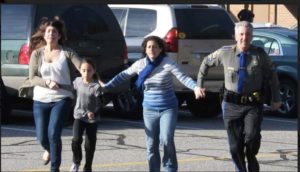 She took a third staged photograph, which raises questions of its own. Why would this officer be running away from the scene of the crime, for example? He ought to be assisting in dealing with the threat from the alleged shooter: if there had been one shooter, there might have been more. And notice the officer whose silhouette can be seen in the background in front of the school. He appears more concerned with what’s going on in the parking lot than with what’s going on inside the school. And for good reason: nothing was going on inside the school! So we have one more photographic proof Sandy Hook was a scam.

Dr. Eowyn, “Sandy Hook: The Boys who were evacuated TWICE”, Fellowship of the Minds, 25 January 2015 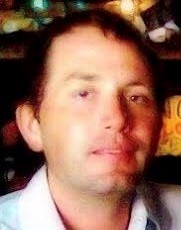 Dan Cromer, MIS, an information specialist, frequently appears on “The Raw Deal” and “The Power Hour” when James Fetzer, Ph.D., is guest hosting. His research on Sandy Hook, Las Vegas, Parkland and Santa Fe has appeared in numerous publications. 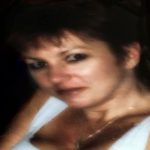