The first two hash tag links below compile astonishing videos, photos and articles on the riots and chaos instigated by the “Yellow Jacket“ movement consuming – over the weekend – not only some famous parts of Paris, but reaching out to other parts of France and other countries, such as Belgium and the Netherlands. 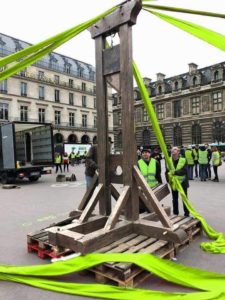 The MSM in the USA has given some coverage as of Sunday (I monitored it closely since Saturday), but it’s brief and mostly lame, and misrepresenting – I think deliberately – the riots as merely about objections to Macron’s allegedly environment-saving gas tax. It is far more than that. The rioters mostly comprise white, working class native-born French – similar to what Hilary Clinton called the “deplorables” in the US – plus some Communists.

As scholar Andrew Joyce said, “These workers spent 40 years chasing “progress” in abortion, gay parades, and mass migration while globalist Big Business laughed at them. Now, impoverished, they realize they’ve been duped.” In short, they are very angry that globalism, as expressed in the policies of technocrat French head of state, Macron, has failed them.  They are revolting against these policies and Macron as the symbolic representative of those policies.

I do not believe, from all that I have seen on this, the protests will end. They will continue and get bigger. Macron is in big trouble, as is globalism in France and the rest of Europe. Conditions will worsen, maybe much more so, unless Macron can somehow stop the protests, which is doubtful for many reasons. The intensity of the violence at the protest, the number of obviously angry yellow-jacketed people taking part in it, and more, imply these questions: is this the start of an anti-globalist or European nationalist spring, similar to the Arab Spring? Is there here the specter present of violent revolution? (One report said the yellow jackets have a working guillotine stashed away to be used at an opportune time.) Is this the makings of a potentially huge black swan that Nassim Taleb has written so well about? Time will tell, but the probability is high that “yes” is the answer to these questions. If so, the French protests, if it gets bigger and is sustained, will most certainly ignite and influence similar and big movements in Europe and – possibly – the United States.

In France this yellow vest movement is mostly about working class being fed up, without political bias. that’s the whole point of the operation. Modest, fed up with all sort of globalist vicious stuff but they don’t really blame it on specific political or banking criminals do far. At this stage it’s important to show it as a failure of the system without any political optics to gather more crowd without the divisive cabal trap… personal opinion.