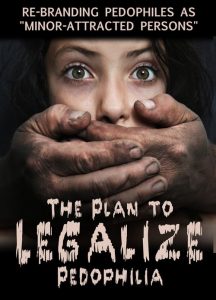 How ‘Equality Act’ opens back door to pedophilia

Perhaps by now you’ve heard of the so-called Equality Act, a sweeping bill that would declare homosexuality and gender confusion to be federal civil rights equivalent to race, religion, national origin, biological sex and so on.

This wicked bill, H.R. 5, right now has 240 co-sponsors in the U.S. House of Representatives, and Nancy Pelosi has pledged to bring it up for a vote in late spring or early summer.

ROBERT STEELE: Black leaders have come out against the “Equality Act” which is nothing more than the legalization of perversion, a long-standing goal of the Democrats particularly, but also the Republicans in Name Only (RINO) who have a taste for pedophilia acquired from those seeking to bribe and blackmail them. It is my hope that among the “heart attacks” planned for the next ninety days, are a handful of major Hollywood, New York, and Washington DC personalities who have made pedophilia the other Third Rail of politics — Zionist control of Congress and the US economy being the first (and of course the Zionists use Jeffrey Epstein and Ghislaine Mazwell and others to push pedophilia and manage pedophilia entrapments — the two perversions are bonded at the hip.

The time has come for the President to clean house. He does that with three moves:

mobilization of 22 million veterans and 3 million law enforcement officers into a political action committee that leads a bottom-up revolution; and

Memorandum for the President: Trump Triumph