ROBERT STEELE:  When I attended the SES/SIS knife & fork class at Harvard  with Ken Minihan, among others circa 1987, I formed the impression that Harvard is simply not interested in new ideas (such as Open Source Intelligence) but rather in protecting its position as the town herald for old ideas, making cosmetic changes on the margins. My opinion has not changed as I have observed them over the years, most recently seeing the reports about a 60% drop in students checking out books while being ALLOWED by their professors to rely on online research known to be biased toward paid sources (Google shows you what they have been paid to show you, not what is relevant), while at the same time no one anywhere (Harvard included) is pointing out that we are processing 1% of what we collect, what we collect is 1% of what is published, what is published is 1% of what is written, and what is written in 1% of what is known.  Talk about spray painting the naked Emperor with vapor-speak…. 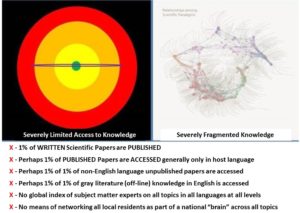 Having said that, this is a good write-up worthy of a full read.  The authors may not be oblivious to the reality that the USA is a cheating culture operated by the Deep State and Shadow Government against the public interest in every possible way; they may not be oblivious to the fact that censorship in the USA is not only more powerful than censorship in China, but that Eric Schmidt is actually proud of having piloted digital censorship in the USA to the point that he could offer it China.  Imagine that.  Censorship “Made in the USA” attractive to communist China and other dictatorships. #GoogleGestapo.

The authors pay lip service to privacy and avoid the obvious, articulated so ably by Micah Sifry: the Internet is broken. To that I would add what Bill Binney and I have articulated, as well as others: the US secret intelligence community — and the US Government generally — are pathologically dysfunctional, rendering “at best” 4% of what the President and other major leaders need, and nothing at all for everyone else. We do not make evidence-based decisions, we make pay to play decisions for the 1% against the 99%.

To understand Harvard [perhaps only the social science sycophantic side of Harvard) one needs  to understand that they do not think, they just posture. They are a self-licking ice cream cone, an incestuous mini-cabal of self-citing circular “scholarship” that is not at all serious about studying points of view in English that are outside their very small circle of “approved” sources with a patina of “sanitized” iconoclasts, and they do nothing at all with foreign language sources particularly Chinese and Russian (and heaven forbid they get should a grip on Iranian or Turkish or even — dare I suggest this — French and Spanish). When SOCOM hired OSS Inc. and InfoSphere SA in 1997 to cover terrorism online, we determined that we must do so in 29 languages including Catalan and Gaelic. There is today no university, anywhere (nor any intelligence agency for that matter) that is committed to that kind of holistic comprehensive analytics.

In passing, Harvard is almost a quarter century behind me. Too little too late.  We have wasted a quarter century. Time is the one strategic variable that cannot be replaced nor bought, so  this is on the IC leaders, the OMB and White House leaders, the so-called university leaders. We blew it. The below cartoon that I paid for captures my view of Harvard as  the apotheosis of intelligent idiocy  that is decades late and not at all useful. 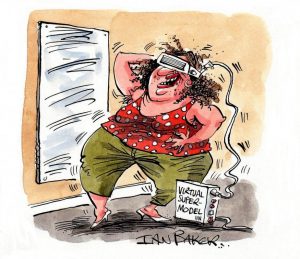