We originally posted this chart in February 2011, which we just updated also breaking out the real estate industry from FIRE (finance, insurance, and real estate).   It is still just as shocking as it was back when we first produced it.

Story and two valuable graphics below the fold.

The U.S. economy jumped the shark in 1990 when FIRE overtook the manufacturing sector in terms of its contribution to GDP.

More stunning is that real estate is now the largest industry sector of the U.S. economy in terms of value added output, now surpassing manufacturing by 0.8 percent of GDP. 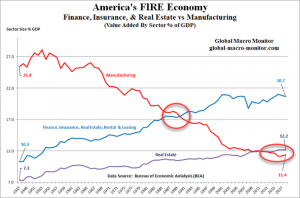 Phi Beta Iota: Speculative real estate pricing including foreign purchases of real instate that in turn includes agricultural lands used to export virtual water (e.g. alfalfa for Saudis), combined with the financiialization of the economy combined with the theft from the economy  of between $21 trillion and $43 trillion depending on how you calculate interest on stolen money, is troubling.

The lack of holistic analytist and true cost economics in both government and the private sector, combined with the rigged system (decisions made for profit of the few with bribery, blackmail, and lies as a foundation), have killed “honest” capitalism and substituted a form of predatory fascism in the USA.

Review: The Battle for the Soul of Capitalism

Review: The Soul of Capitalism–Opening Paths to a Moral Economy