Is Chabad running the Trump Administration through Jared Kushner?

I’ll describe Chabad the way I see it given my past membership in it. Chabad is a racist organization – a Jewish supremacist missionary cult whose main goal is Jewish total superiority over the “Goyim” and their enslavement. By Jonas E. Alexis 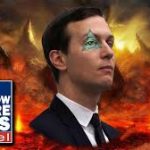 Phi Beta Iota: As much as we love our President, we consider Jared Kushner both a clown and a criminal. His acceptance of a $1B bribe from Qatar should have resulted in his immediate expulsion from Trump family circles, and he should never, ever, have been allowed to work out of the White House.

ADDENDUM: The French shadow foreign minister is absolutely certain that President Trump is carrying out a MAGNIFICANT anti-Zionist campaign (not anti-Israel) and that Epstein plus 9/11 are two aces that guarantee America First over Israel First in the second term but not before. China, Egypt, Iran, Russia, Turkey all in agreement: Israel to be uninvented, Palestine to be restored. It is possible the First Son-in-Law is being used in a clever way.