Completely rewritten for 2020 with over 550 pages and 30 chapters. It is time to look at OSINT in a different way. For many years, and within the previous six editions of this book, we have relied on external resources to supply our search tools, virtual environments, and investigation techniques. We have seen this protocol fail us when services shut down, websites disappear, and custom resources are dismantled due to outside pressures. This book aims to correct our dilemma.

END_OF_DOCUMENT_TOKEN_TO_BE_REPLACED

Superb on passive online research — nothing on overt human and ground truth eyes on OSINT.

END_OF_DOCUMENT_TOKEN_TO_BE_REPLACED

This briefing has been funded and approved for delivery in its present form, in April 2016, to the military, police, and national intelligence services of Denmark. It was also presented in Norway, but less formally. As NATO and a number of countries “re-think” Open Source Intelligence (OSINT), this briefing and the related white paper, should help focus on the essentials that have been neglected for the past quarter century.

It is nothing less than an indictment of 25 years of expensive passive failure associated with the mis-direction of OSINT away from active human sourcing as I originally envisioned, toward passive online searching that is, as one study recently concluded, over 80% absolute garbage.

END_OF_DOCUMENT_TOKEN_TO_BE_REPLACED 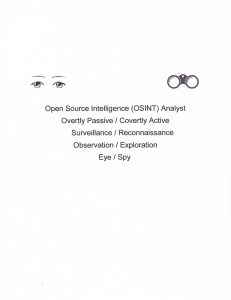 Need this for each country.

You’ve Read Our Open-Source Research Guidebook. Now Let’s Use It.

This article is part of a larger guidebook by RuNet Echo to help people learn how to conduct open-source research on the Russian Internet. Explore the complete guidebook at the special project page.

RuNet Echo has now published eight installments in a guidebook on conducting open-source research on the Russian Internet. This ninth and final entry takes the tools and instructions we’ve been studying and applies them to a single case study: the wildfires that caused significant damage to the Siberian city of Chita in 2015.