At the end of Barack Obama’s worst week since taking power a year ago, the US president’s fortunes look set only to deteriorate over the coming days. 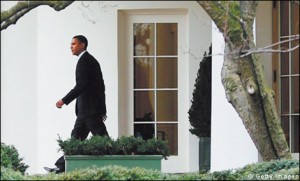 Phi Beta Iota: We find it quite remarkable that there is absolutely no “intelligence” in the sense of decision-support anywhere in this story.  The last two Administrations (Bush-Cheney and now Obama-Biden) have been noteworthy for the completely absence of strategy, intelligence, Whole of Government management, balanced budget–just about everything a public has a right to expect from its elected and appointed and paid government.

Nightmare is the wrong word–this is self-imposed insanity based on willful ignorance and the absence of a national Open Source Agency (OSA) with a degree of independence equal to that of the Judiciary.  In the Age of Information, information itself has become the Fourth Estate, and the Administration either needs to get a grip on reality and start governing with informed maturity, or watch as others pass them by–Brazil, China, India, Iran, Russia, and Venezuela, for example.

Election 2008 Chapter: The Substance of Governance