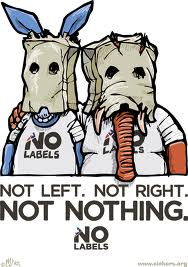 After soliciting the thoughts of its members, the No Labels organization has settled upon three areas of focus for the group’s efforts: Policing partisan politics, promoting fiscal responsibility, and election reform.

“Based on your feedback we have decided to focus on three core policy principles going forward.

First is the one that we all united on initially, which is policing hyper-partisanship, so that we’re the honest brokers in politics who are being that counterweight, calling out the folks who play the politics of incitement and rewarding and encouraging those political leaders who have the courage to reach across the aisles.

“The second issue is fiscal responsibility. We realize that this is an issue that unites most of the people who have been attracted to No Labels. It’s an issue of generational responsibility. The debtand deficit  represent generational theft. We know that to hand our nation off to the next generation better than we found it we need to deal with our deficits and our debts and get our budget down back to something approaching balance.

“And finally, election reform. We know that this third pillar here is one of the key issues. Let’s really open the process, create a more level playing field. Things like redistricting reform and fighting for more open primaries are ways to depolarize our politics and heal the harsh but artificial polarization of our politics today.”

To that end, he continued, No Labels will be staging a rally on March 1 on the steps of the Capitol in Washington under the banner, “Fewer Checks, More Balance.”

Read rest of the puff piece….

Phi Beta Iota: NO LABELS is a con job funded by Mike Bloomberg, Peter Peterson, and various others who believe that “four more years” for Wall Street trumps all other interests.  After their opening event was scorned back under the rocks where it was devised (see below links),  they have evidently regrouped and are planning a rally in Washington DC; we can only speculate at how much individuals will be offered to show up.  NO LABELS is about “fiscal responsibility” which in their world is about reducing the deficit for the benefit of Wall Street.  They are NOT about eliminating poverty in the USA, restoring honest jobs, eradicating corruption in both corporations and the US Government, or even about adhering to holistic analytics in support of coherent policy, something that can only be achieved if one accepts a Strategic Analytic Model.  NO LABELS is being deceptive in bracketing their original goal, which failed the smell test across America, with two “new: goals.   They are not really about hyper-partisanship (by definition, NO LABELS loves the two-party tyranny, IndependentVoting.org is just a Trojan Horse) and certainly not about elections reform–if they had an ounce of integrity, the would have accepted the ready-made Electoral Reform (1 Page, 9 Points) program, but they are not.  They want to talk about electoral reform while pressing for the Wall Street version of fiscal responsibility (1% get all the money, 99% get all the responsibility).  Mike Bloomberg is a smart man–we really do wonder why he is funding this faux melange.

Reference: Cyber-Intelligence–Restore the Republic Of, By, and For…