A quest for truth about the last days of bin Laden

Rawalpindi (Pakistan):  In his quest for the truth about his country’s most notorious guest, Shaukat Qadir started where it all ended: the room where Osama bin Laden was killed.

Last August, Mr. Qadir, a retired Pakistani Army brigadier, retraced the steps of the American commandos who stormed through the corridors of Bin Laden’s hide-out on May 2. 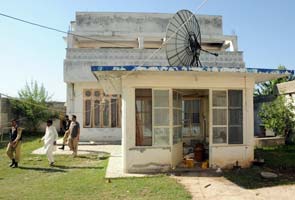 Climbing the stairs to the second floor, Mr. Qadir passed a body outline that marked the spot where Bin Laden’s 22-year-old son, Khalid, was shot dead. Then he turned to a small room with a low ceiling, an empty wardrobe and a tight cluster of bullets holes in one wall, he said. Above that, on the ceiling, was a fading splash of blood that, his Pakistani intelligence escort told him, belonged to Bin Laden.

“As a former soldier, I was struck by how badly the house was defended,” Mr. Qadir said in an interview. “No proper security measures, nothing high-tech – in fact, nothing like you would expect.”

Mr. Qadir’s quixotic investigation began as a personal attempt to truth-check the competing accounts of Bin Laden’s last years in Pakistan. But his work has already come under scrutiny and criticism, mostly on the grounds that his heavy reliance on Pakistani military and intelligence sources leaves him open to official manipulation.

At the least, though, the end product – a novella-length report, still officially unpublished – offers tantalizing possibilities about Bin Laden’s circumstances and the suspicions that drove relations between Pakistan and the United States to the brink.

For instance, Mr. Qadir claims that Bin Laden’s fifth and youngest wife, Amal Ahmed al-Sadah, told Pakistani interrogators that her husband underwent a kidney transplant operation in 2002 – a claim that, if proven, could help explain how the ailing Saudi militant was able to survive with a known kidney ailment, but raises questions about who was helping him. He also heard of poisonous mistrust between Bin Laden’s wives. In the cramped Abbottabad house, he was told, tensions erupted between Ms. Sadah, described as “the favored wife,” and Khairiah Saber, an older woman who occupied a separate floor. In interrogation, Ms. Sadah accused her rival of having betrayed their husband to American intelligence.

Bin Laden’s youngest wife also told interrogators that her husband shaved his beard and disguised himself as an ailing Pashtun elder as he leapfrogged between safe houses across northwestern Pakistan, eventually regrowing the beard after finally settling in the Abbottabad house in 2005.

In one sense, Mr. Qadir’s work is an interesting entry in a decade-long parlor game among spies, soldiers and journalists, all guessing the whereabouts and condition of the world’s most wanted fugitive.

Despite Bin Laden’s death, many of the toughest questions remain. Who helped him stay on the run? How did the C.I.A. track him down? And, perhaps most important, did Pakistan’s generals know he was living a stone’s throw from their leading military academy?

Pakistan’s government says the answers will come from an official commission of inquiry, led by a Supreme Court judge, that has been working since May. Yet few believe the Abbottabad Commission, as it is known, will succeed. And at times, the Pakistani government has seemed more interested in moving on than seeking answers: on the night of Feb. 25, the local authorities in Abbottabad sent bulldozers to demolish Bin Laden’s house after nightfall, erasing a painful symbol of an embarrassing episode for the military.

Publication of the commission’s findings, originally scheduled for December, has been repeatedly postponed, and critics of the government smell political pressure to tone down its findings.

Among those who have testified is Mr. Qadir, a 64-year-old former infantry commander. Suspicious of official explanations of Bin Laden’s life and death, Mr. Qadir set out to find his own truth. He embarked on a sleuthing expedition that would last eight months and has left him $10,000 out of pocket. He traveled into the tribal belt and Afghanistan to interview old tribal contacts, and into the hushed headquarters of Pakistani military intelligence agency, the Inter-Services Intelligence Directorate, or ISI, in Islamabad, where officials provided briefings.

A former Obama administration official who read the report agreed with some of Mr. Qadir’s findings, like a claim that Bin Laden and his deputy, Ayman al-Zawahri, suffered serious disagreements that led to Bin Laden’s being pushed to the sidelines. “This divide grew with time, and remained a source of tension until the day Bin Laden died,” the official said, speaking on the condition of anonymity. “His role had been diminished.”

The official was puzzled by the account about Bin Laden’s wives, saying that previous American intelligence reports had indicated that the first wife, Ms. Saber, was the closest to Bin Laden. The C.I.A. has since interrogated both women in Pakistan; Ms. Saber proved to be “defiant, difficult and refused to engage,” the American official said. Several of the conclusions that Mr. Qadir draws in his report are highly contentious, like a belief that Qaeda operatives betrayed their leader to earn America’s reward money. “They wanted Bin Laden gone, and they wanted a share of the $25 million,” he said. Peter Bergen, a terrorism analyst and author of a forthcoming book on Bin Laden’s last years, called that a “ridiculous” notion.

Mr. Qadir’s report was “larded with strange conspiracies,” Mr. Bergen said, adding that it was indicative of a broader culture of conspiracy theories in Pakistan. “When I was in Abbottabad in July, plenty of people told me Bin Laden didn’t live there. What do you say to that? It’s so untethered from rational discourse,” he said.

Mr. Qadir, for his part, concedes that his conclusions are based on conjecture, and admits that his ISI briefers may have concealed crucial facts. “I’d be a bloody fool if I didn’t see that,” he said. “I don’t say this is the entire truth. But it’s the closest you will get at this point in time.”

Other Pakistani soldiers have also theorized about Bin Laden. Last fall Ziauddin Butt, a former ISI chief, reportedly told a conference that while he was in power, Pakistan’s former military leader, Pervez Musharraf, had been covertly sheltering Bin Laden. Contacted by telephone, Mr. Butt said he had been misquoted but declined to elaborate. Another account that is popular on military message boards claims that Bin Laden was betrayed by a retired Pakistan spy, who has since fled abroad.

One question in particular has stayed at the heart of the mutual distrust between Pakistan and the United States: was the ISI incompetent in failing to spot Bin Laden under its nose, or complicit in his protection?

Muhammad Hanif, a popular Pakistani novelist, recently suggested that the answer was both; Mr. Bergen, the analyst, said it was neither. “Bin Laden was a hyper-paranoid guy who went to extreme lengths to hide himself. Don’t forget that it took the U.S. government 10 years to find him, with huge resources at its disposal. And we had the will to look,” he said.

Several American and Western officials, speaking in Washington and Pakistan on the condition of anonymity, said that the C.I.A. had scanned millions of documents taken from computer disks found in Bin Laden’s house yet found no evidence of official Pakistani support. But for some analysts, that proves nothing.

“There is no smoking gun, but there is also no evidence that firmly rules out complicity,” said Bruce Riedel, a former C.I.A. officer and Obama adviser.

The official verdict will come from the Abbottabad Commission, which on Wednesday heard testimony from the interior minister, Rehman Malik.

But many are skeptical about what will emerge, with at least one commission member having apparently already made up his mind.

Just a few weeks into the commission’s deliberations last July, Nadeem Ahmed, a former general on the panel, told Australian journalists that he had firmly believed “that no intelligence organization in Pakistan would do such a stupid thing” as harbor Bin Laden.

Suggestions to the contrary were the product of an American news media conspiracy, he added. “There is a deliberate design to undermine the security establishment,” he said.

With such high military and political stakes, many Pakistanis believe that the truth will remain as elusive as Bin Laden once was. “You have to ask the right questions to get the right answers,” Mr. Qadir said. “I doubt this report will explain anything to anyone’s satisfaction.

Phi Beta Iota:   Emphasis added above (“plenty of people told me Bin Laden didn’t live there.”.  The truth will come out one day.  At this time all evidence points to this entire matter being a covert action led by CIA that deceived JSOG with a patsy in a safehouse created by Blackwater a year earlier, if not CIA directly.  The claim that JSOG captured “millions of pages” is highly suspect–if anything, we suspect that recent stories are from the creative but culturally clueless minds on various covert action staffs — we’re waiting for the one about Bin Laden’s 22-year old having a crush on Julianne Moore and telling his Dad he wanted to be an FBI agent when he grew up….