“In November 2009, boyd traveled to New York City to deliver what she expected to be a major address at the Web 2.0 Expo, one of the year’s most important gatherings of Internet professionals. Her topic was what she terms “living in the stream,” or how not to drown in the flood of information that comes at us all the time. Teens, she believes, are especially good at this. The most web-savvy of them manage to stay open to all the digital stuff without having to process everything. They take what they can handle and remain untroubled that much may elude their grasp. It’s a kind of cyber-Zen. “The goal is . . . to be peripherally aware of information as it flows by, grabbing it at the right moment, when it is most relevant and valuable, entertaining or insightful,” she said at the Expo. “It is about a sense of alignment, of being aligned with information.” She talked about the high some Twitter users get “feeling as though they are living and breathing with the world around them, peripherally aware and in tune, adding content to the stream and grabbing it when appropriate.”” 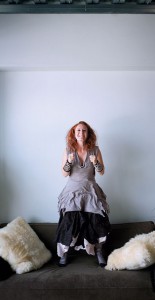 Boyd is the country’s go-to expert on teenagers, social media, and the web. In 2010, Fortune named her one of the “smartest people in tech.” Companies such as Yahoo! and Google have sought her advice. She IMs with Facebook founder Mark Zuckerberg. In addition to her job as a senior researcher at Microsoft Research, she’s an assistant professor at New York University and a fellow at the Berkman Center for Internet and Society at Harvard. At a time when many of us feel overwhelmed by the onslaught of information and terrified by what our children might encounter on the Internet, she has emerged as a source of calming wisdom and insight, a guru for our tech-crazed times, a prophet of the Internet age. And here is what she wants to tell parents: relax. The Internet is not nearly the revolutionary technology we believe it to be. Yes, it is changing teenagers’ lives, but not as much as we fear. The Internet can’t change what it’s fundamentally like to be a teenager navigating a course between childhood and adulthood. Kids are still going to be kids, with all the joys, setbacks, growing pains, social awkwardness, and triumphs that accompany adolescence. “What I want to do is help parents see the world from their child’s perspective,” she says. “I’m like, ‘Calm down, because I’m trying to help you understand your kids.’”

Phi Beta Iota:  The kids are waiting for us old folk to die off so they can restructure.  The longer the adults hang on to Epoch A top down “because I said so” power, the worse off our kids will be.  Get out of the way.