This email builds on the information in my 8 May email entitled, The Real Scare in Syria Is Not Chemical Weapons.”  Attached below is a post from Joshua Landis’s Syria Comment blog.  Landis is a professor at the University of Oklahoma and a specialist on Syria — his blog often provides useful, insightful information.

Particularly important, IMO, are Landis’ comments relating the conflict in this region to its spillover effects into Turkey (for more background see also: “Will Syria’s Revolt Disrupt the Turkish Borderlands?.”

Spillover is a very serious issue, because the Turkish province just north of the map below, Hatay Province, used to be part of Syria — it was in effect ceded to Turkey by France (and the UK and the League of Nation) in the late 1939s as part of a subtle deal to elicit Turkey’s neutral if they became involved in a war with Germany (WWII) — a promise Turkey kept. 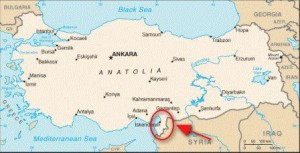 The map herewith shows where Hatay is located:

Landis’ comments, among other things, highlights some of the forces sucking Turkey may  further into the Syrian quagmire.  Note text marked in red below are my comments.  The first half of this essay is a summary of Landis’ personal views on the situation in Levantine Syria, the second half is a series of essays outlining reasons why the US should not intervene militarily.

Do the Massacres in Bayda and Banyas Portend Ethnic Cleansing to Create an Alawite State?

This question is taken up in two thoughtful articles by Hassan Hassan and Michael Young. Hassan Hassan argues that “sectarian cleansing is not being conducted for the purpose of establishing a potential state, but rather for other strategic purposes, including recruitment of Alawi fighters, deepening sectarian tensions in Assad’s favor, and ensuring a popular base of support,” (see Elizabeth O’Bagy). Michael Young sees them as a possible prelude to what may be coming if the Alawites begin to lose, but for the time being, he suggests that “ethnic cleansing” may not have been the intended result, but the massacres did serve as a shot across the bow of the Sunni population of the coast.  (see extended quotes below).

Turkey’s Foreign Minister Davutoglu claimed that Syria’s army has begun ethnically cleansing Banyas because it is losing elsewhere in the country. But Assad’s forces are not losing. According to both Liz Sly of the Washington Post and Reuters reports Assad’s forces are gaining ground in Syria, at least for the time being. This can only be cold comfort to the Sunnis along the coast who speak of their fear of ethnic cleansing.

The fighting in al-Bayda began when a bus carrying pro-regime militants, or Shabiha, was attacked, by rebel militiamen, killing at least seven and wounding more than 30, according to activists quoted by DPA. After the rebels attacked a bus, the village became “the scene of fierce fighting between the army and rebel battalions.” The brutality of the shabiha revenge on both al-Bayda and Banyas was depicted in a series of photos and videos that even by the standards of this war were shocking. The religious passions that have now colored every aspect of this fight ran out of control.

How likely is ethnic cleansing along the coast?

The likelihood of ethnic cleansing in the coastal regions is high. It will rise even higher should Assad’s troops begin to lose. The Sunni populations of the coastal cities will be the first to be targeted by Assad’s military, if it is pushed out of Damascus. Should the Alawites be compelled to fall back to the predominantly Alawite region of the mountains stretching along the western seaboard of Syria, the Sunnis of the coastal cities and eastern plan will be the first to suffer. Should Sunni militias, which are perched only kilometers from Latakia, penetrate to the city itself, Alawites may turn against the region’s Sunnis fearing that they become a fifth column. There are many precedents for this sort of defensive ethnic cleansing in the region.

The Sunni cities of the Syrian coast — Latakia, Jeble, Banyas, and Tartous — had no Alawite inhabitants in the 1920s, when the French began taking censuses in Syria. Certainly, Alawite, servant girls, day laborers and peddlers may have worked in the cities, but they were alien to them. Sunnis and Alawites did not live together in any Syrian town of over 200 people, according to Jacques Weulersse, the French academic who published the most thorough and reliable study of the Alawites, Le pays des Alaouites, in 1940.

Their demographic segregation was profound. The deep mistrust and hostility that separated the two communities was caused largely by religious differences.