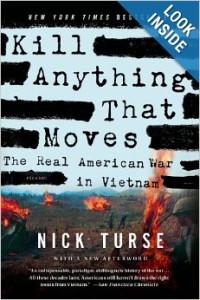 There is some evidence for his proposition. He greatly overstates the incidence of rape and deliberate murder of civilians however. He makes it sound as if this was a routine/daily occurrence. In my year there in combat, I did not see one incident such as this.

I’ve been doing a lot of thinking about my experience in Vietnam as a result of reading this book. It has some elements of truth to it, especially concerning the inflated body counts and influence from the chain of command for bodies. However, from my experience he has looked for (and found) many individual instances of abuse of civilians in that war and made it seem that was much more of a regular occurrence than it was.He doesn’t point out the danger we were in from women and children who would set booby traps or shoot at us. It was a nightmare scenario and I’m sure many soldiers lost their lives because they were not cautious enough with women and children.

To some degree, I think he takes the worst instances of a 12 year war and expounds on them making it sound like all units did this every day. In my experience that was not the case. I was a forward observer with a maneuver company in Vietnam in 1967. I patrolled the length of the An Lao Valley many times. His descriptions of what happened there have some merit. Now that I have reread the entire book many of his general descriptions are often overstated and the overall impression he gives of the deliberate violence to civilians is probably overstated to reach the conclusion he is looking for.

I am particularly skeptical of the rape and abuse of women and children. I saw no incidents of that kind my entire year in country and my contemporaries in other units across the division did not see that either. I think this is a major flaw in his reporting. He may have had a few soldiers report incidents of that, but I guarantee you that was not anywhere near as prevalent as he describes.

I have personal first hand knowledge of some incidents similar to what he describes. I can only speak with authority on what happened in the An Lao Valley and Bong song plain for the entire year of 1967. What I experienced there is pretty much as he described it as far as destruction of property, H & I fires, inflated body counts and emphasis on body counts was concerned.

I saw very little of the deliberate cruelty to women and children and sexual assault he describes. I suspect that occurred, but not in my unit or my contemporaries units, and not to the degree he alleges.

Since he is relying on written reports for his information, he may only be looking for information that confirms his conclusions. The report on the an Lao Valley and Bong song Plain has the ring of truth to it, but not when it comes to rape and abuse of women and children.

Still it was pretty terrible and what I did see could be considered an atrocity? It does not have to be a My Lai, there were few of those. However, designating the entire An Lao valley a free fire zone and then forcing people from there homes and destroying there huts, livestock and food supplies is an atrocity in my view and that is what I viewed there in person.

Too soon old, too late smart.