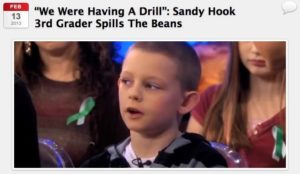 Sterling Harwood: In Solidarity with Alex Jones – Snopes.com fails to check the facts about Sandy Hook or it is complicit

Snopes.com is the #1 place many turn when hearing about a conspiracy theory, such as that the Sandy Hook shooting was faked, for the very first time. Snopes.com has done its best to debunk every Sandy Hook conspiracy theory of which it has become aware.  Since the evidence the shooting at Sandy Hook was contrived—it was a two-day FEMA drill presented as a LIVE event—Snopes.com must have its facts wrong [or be a Deep State front explicitly designed to undermine “truthers.” My aim in this memorandum is to debunk Snopes.com own debunking.

Consider the case of what Snopes.com admits was an unidentified man seen with a gun in the woods near the school on the day of the massacre, as reported in The Newtown Bee. Snopes.com reassures us that a reliable local law enforcement source says that the armed man at or near the scene of the crime was only an off-duty tactical squad police officer from another town. But this so-called (implicitly anyway) innocent explanation raises about 100 more questions than it answers. What was his name?  Why can’t we know his name? Why was he armed? Why was he armed when he was off-duty?

Why did he decide to spend his off-duty hours prowling the woods where a massacre was to occur or had just occurred? What did he see, if anything, from the vantage point of the woods or wherever else he traveled in the area that day? To whom did he report, if anyone? With what weapon or weapons was he armed?  Did those weapons match those of the accused killer by any chance? Did the man fire his gun? If he fired his gun, did he hit his intended target? What was his rank? What was his level of training? What was the name of the other town he was from? Was he called in from out of town by any law enforcement officials in Newtown? And of course we could go on.

This so-called innocent explanation of an armed tactical squad officer from out of town just happening to be there strikes me more than a bit as being as alarming an explanation as the following hypothetical one: Oh, don’t worry about that armed, unidentified man we saw in the woods behind the massacre; he was just a highly trained off-duty CIA sniper who was just visiting from Hong Kong. What?! If he were from the CIA, we would know why his name was hidden; but tactical squad officers are not undercover officers, so there’s no reason to hide his name. You can listen to a police scanner and go to wherever the SWAT team is called and take photographs with a telephoto lens of all the tactical squad officers. 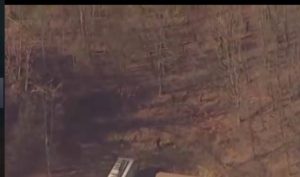 Now consider the case of another unidentified man.  This time the man was detained, handcuffed, and pinned to the ground.  He may have been armed but Snopes.com evidently thinks that is so unimportant it fails to say one way or the other. But don’t worry, Snopes.com reassures us that police determined he was just an innocent passerby. Snopes.com gives no citation to any source it has for that reassurance. Snopes.com fails even to rely on the prestigious Newtown Bee here, as it relied on before in trying to reassure us about the mysterious, armed tactical-squad officer.

Snopes.com fails to identify which police officer or officers made that determination that the handcuffed man was just an innocent passerby. Snopes.com also fails to give the handcuffed man’s name or physical description at all. If the guy is so innocent, then why refuse to release his name so the free press of this mighty country can double-check to see if the police might have made a mistake in making their determination of his alleged innocence. Police do make mistakes, you know.

The Los Angeles Times (14 December 2012) reported the man’s name as Chris Manfredonia. The story is that police released him because he said he was a parent who had come to the school that day to help his 6-year-old daughter make gingerbread houses. There are, however, two more suspicious facts: first, Manfredonia was wearing camouflaged clothes when spotted in the woods behind the school; second, Manfredonia’s home address is “directly behind” the other murder scene, the home of Adam Lanza.

There are other puzzling issues that the 15-page entry on Snopes.com for Sandy Hook fails to answer. A second liquid missing from the scene, besides the tears of any parent, is blood. (See, for example, Sofia Smallstorm, “Unravelling Sandy Hook,” and Peter Klein, “What Really Happened at Sandy Hook?”) Snopes.com has no answer for the absence of any photographs or video of blood from the murder scene or from any of the scenes where others victims were, officially, at least, non-fatally injured, which is highly unusual.

There was plenty of blood from, for example, the Manson murders, the OJ murders, Columbine and other murder scenes that came out but none at all from Sandy Hook. In the aftermath of the Oklahoma City bombing, one color photograph of a fireman holding a bloody, mortally wounded child won some prestigious awards for photojournalism, and it is a haunting photograph indeed with deep symbolism on several levels. We even have photos of, for example, the dead face of Marilyn Monroe, the dead face of Elvis Presley, and the dead face of John Lennon leak out, yet we see no leaked scenes of blood or dead faces from the more elaborate Sandy Hook massacre. 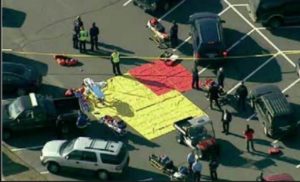 In fact, we don’t see blood on any non-fatally wounded people, though there were some, according to the official story at least.  We see no blood on any emergency medical technician, law enforcement officials or health care personnel. And there were no bodies or blood on the triage tarps. And this is in the age of cell phone photography, video-cameras, and helicopters with cameras that can zoom in for close-ups. Isn’t the lack of blood implausible, especially given how many people were filmed milling around the parking lot of the school soon after the massacre?

Snopes.com also has no answer for the fact that there are gaps in the Internet and email usage at the school that suggest the school was not in use regularly but was used only for a drill. Speaking of Internet usage, another implausible fact, if the Sandy Hook massacre is totally un-staged rather than any sort of psychological operation or drill, isn’t it implausible for there to have been Internet donation pages set up for some of the victims so soon after the murders of the particular victims were confirmed? As Nobody Died at Sandy Hook (2015) documents, some donation sites were launched before the massacre. How is that possible, had this not been a staged event?

Snopes.com also has no answer yet for a young boy interviewed by Dr. Oz on the Dr. Oz show (see the fascinating YouTube.com clip from Dr. Oz’s show) who says that the Sandy Hook emergency was only a drill. Dr. Oz changes the subject immediately instead of asking the boy why he thought it was only a drill or who told him it was only a drill. I find Dr. Oz’s changing the subject so fast suspicious. Perhaps Dr. Oz lacks an enquiring mind or was just obeying a producer’s shout into his earpiece to switch to another subject. Perhaps his producer shouted into Dr. Oz’s earpiece, “Don’t pay attention to the man behind the curtain or to the Sandy Hook victim who said it was a drill. Nothing to see here. Move along!”

Sterling Harwood, “Every Grain of Sandy Hook: Snopes.com and Plausible Deniability”, in Jim Fetzer and Mike Palecek, eds., Nobody Died at Sandy Hook (2015).

“We were having a drill”: Sandy Hook 3rd Grader Spills the Beans 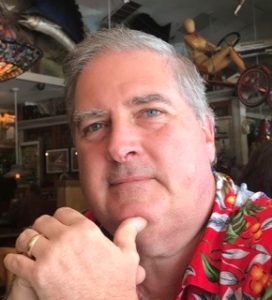 Sterling Harwood earned his J.D. from Cornell Law School and his Ph.D. in philosophy from Cornell University. Since 1998, he has practiced law in San Jose, California, from which he has now retired. He earned tenure as an Adjunct Philosopher at Evergreen Valley College after teaching at Cornell Law School, Cornell University, Lincoln Law School, San Jose State University and Illinois State University. His books include Crime and Punishment (with Michael J. Gorr, 2000), Business as Ethical and Business as Usual (1996), Judicial Activism (1996), and Controversies in Criminal Law (with Michael J. Gorr, 1992).