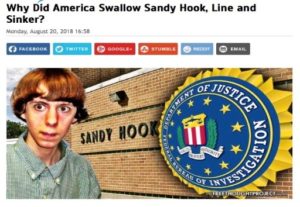 James Fetzer: In Solidarity with Alex Jones – Why did Americans Swallow Sandy Hook, Line and Sinker?

Media Matters has summarized Alex Jones’ comments about Sandy Hook, with the preface, “Over the past five-and-a-half years, Jones has repeatedly pushed conspiracy theories about the tragedy, including casting doubt about whether it even happened or claiming that the shooting was staged by nefarious groups using actors”, and offered observations such as the following (even showing him saying them):

Jones has said the shooting has “inside job written all over it,” called it “synthetic, completely fake, with actors, in my view, manufactured,” claimed “the whole thing was fake,” said it was “staged,” called it a “giant hoax,” suggested that some victims’ parents lied about seeing their dead children, and pushed other toxic conspiracy theories.

After reading the memoranda that compose this series, how could anyone doubt that Alex had it right and the mainstream media had it wrong? that the vilification of Alex has no basis in fact and appears to be a massive propaganda campaign on behalf of the Deep State? At this point in time—with massive and compelling evidence available—what remains up for debate? Nothing! As he observed, it was a hoax.

So why did Americans swallow Sandy Hook, Line and Sinker (in the memorable phrase of John Spring)? The answer appears to have at least two dimensions, including that the “official narrative” was endorsed by local, state and federal officials (who, unknown to the public, were complicit in the deceit) and highly aggressively reported by the mainstream media–without entertaining any doubts or questions about it.

When those questions and doubts began to surface from the alternative media, where, among the most conspicuous, we found Alex Jones, familiar techniques of ad hominem attacks and suppressing evidence manifested themselves, virtually from the start. When interest in Sandy Hook nonetheless persisted and a book about it was published, the Deep State called upon its covert resources to have the book banned.

So it was a double-sided attack in promoting a false narrative while suppressing those who had proof that it was untrue, leaving the public with only one side of the story, where its emotional impact had a powerful effect upon the public, where to this day there are many who are unwilling to even talk about Sandy Hook and regard anyone who raises the least doubts about it as sadistic, immoral and confused.

Some points ought to have made a powerful impact. As John Spring observes, when the FBI published its Consolidated Crime Report, CRIME in the United States 2012, its Table 8, in the column “Murder and nonnegligent manslaughter,” does not list any homicides in Newtown or even in Monroe, where some  the students from Sandy Hook were allegedly using the Chalk Hill building after theirs had been closed because of asbestos and other toxic materials. Richard Plante coincidentally visited the school in 2010: 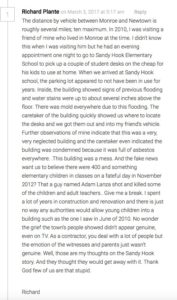 Between the massive propaganda propagated by the MSM and the suppression of its exposure by the Social Media Giants, you are in the grip of a pincer movement, which demands a devastating response lest the perps succeed in their desperate efforts to defeat your agenda to “Make America Great Again”. I believe you could immeasurably strengthen your hand politically and benefit the American people by:

It has been my great honor to collaborate with Robert David Steele, initially on the 9/11 Truth series and now on this Sandy Hook Truth series. As you have so appropriately observed, the MSM has become “the enemy of the people”. You are awaken the public to the manner in which the people have been played by the media. We therefore also stand in solidarity in your heroic efforts to Make America Great Again!

Media Matters, “Sandy Hook families are suing Alex Jones. This is what he said about the shooting.”