Is B.D.S. Anti-Semitic? A Closer Look at the Boycott Israel Campaign

Your BDS article is dishonest.  Zionist Israel is an invented, genocidal, apartheid criminal state and most Jews oppose both the existence of the state, and its treatment of Palestinians.  I attach two images for information. I doubt you care to learn, but if you do, start here: 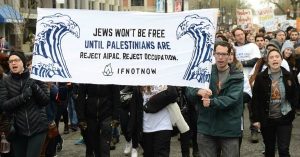 I find it particularly hypocritical for the Zionists to insist that Israel — an invented state claimed by Khazar criminals — is exclusive to Jews at the same time that the Zionists have, since the mid-1930’s, done everything they could to destroy the United States of America with successful advocacy of open borders and multi-culturalism.

There are nine million decent Jewish voters in the USA. The power of Israel in the USA is based on bribery, blackmail, and lies, not on Jewish voters.  Jeffrey Epstein is the tip of the Mossad pedophilia entrapment blackmail operation — there are 49 other cells — one in every state of the Union.

Do you really think 27 states have passed unconstitutiional laws making it a felony to exercise one’s First Amendment rights to speak in favor of BDS because this was a good idea? I venture to suggest that half if not more of those votes were achieved through bribery and blackmail.

Zionism is over. In combination, from the USS Liberty to 9/11 to Epstein to Ben Garrison being disinvited after a massive cyber-stalking campaign (itself a federal felony), the US public is now awake.

It’s a real shame you are now “all the news allowed by Zionists.” Shame!